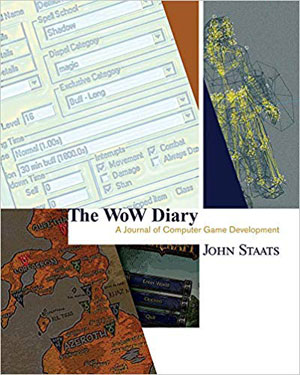 The WoW Diary: A Journal of Computer Game Development:
This is a fun look into the development of the original World of Warcraft (2000 - 2004), written by one of the original designers of dungeons and indoor spaces. It's only mildly technical and worth a read for anyone who has fond memories of playing WoW. It gets a little repetitive towards the end but is a fast, pleasant read throughout.

World of Warcraft in 2020:
Out of nostalgia for the glory days, I resubscribed for a month of WoW to see what has changed. The answer? Nearly everything. Skill trees are replaced by change-anytime Specializations and Talents (a la Diablo 3) and everything has been streamlined as much as possible to get you to max level. All of the new features are cluttered by detritus from the old, like 800 class trainers scattered all over the cities that no longer serve any purpose in the game.

Logging into old characters results in a confusing hieroglyphic of the few remaining skills on your Action Bar that haven't been replaced and about 30 seconds of glowing notifications while the game grants you the 200 achievements you missed. One of my characters actually leveled up just by walking from a mailbox to an auction house because of some new exploration zone overlayed on an old location.

It's too complex to jump back in after so many changes, so I started a few new characters to learn like a new player. A change I'm ambivalent on is "world scaling", where each zone scales up or down to match your current level. While this lets you quest at your leisure without ever outleveling the quest rewards, it opens up cheese tactics like getting 10,000 experience points for a starting area quest to kill 5 boars, and prevents you from ever running through an old zone without getting attacked by a spider. Animations feel just a little bit more unstable than they used to, with damage done to monsters half a second before your character reacts.

I ultimately quit again after just two weeks. There has always been a conflict between the leveling process and the endgame, and Blizzard has made leveling easier so more people can sit around at level 120. This implicitly takes the fun out of a huge chunk of the game. When you gain levels so fast that you don't even have time to enjoy your current gear or get comfortable with new skills (I went from level 38 to 46 in about 4 hours of questing), you don't get a chance to appreciate the world as you go, and you rarely have an incentive to talk to real people. "Rush to the end where there's nothing to do" is so ingrained in the gameplay now that they might as well remove level 1- 119 altogether.

After canceling Warcraft, I reinstalled Elder Scrolls Online for a free-to-play, solo-friendly experience that's so much prettier looking, and have enjoyed playing it in spurts between drywall installation and Maia care.