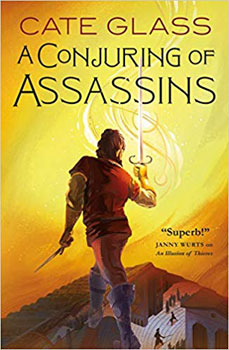 A Conjuring of Assassins is the second book in the Chimera series by Carol Berg, writing under the pen name, Cate Glass. (I also reviewed Book One, An Illusion of Thieves last year). The author delivers a satisfying, self-contained story that can be appreciated on its own, but doesn't push the overall series forward in a significant way.

Book Two picks up immediately after the grand caper in Book One, with Romy and her friends recruited to solve a tangled political problem by using their particular talents. The first 20% of the book is peppered with plenty of gentle recap, which will be great if Book One isn't fresh in your mind but more irritating if you're reading them back-to-back. There's an overreliance on coincidence to introduce new story elements, such as Placidio the swordsman running afoul with the Pizotti family, Romy's encounter with a familiar lawyer, or the discovery of an injured man in the fog.

Once the characters begin their new assignment in earnest (around Chapter 6), the book finds its stride and will keep you hooked until the end. The heist storyline is centered more around political intrigue and influence this time, adding a well-executed layer of interest above simply stealing a MacGuffin. I have always appreciated the way that this author builds suspense in a central mystery by methodically dropping hints and reminders of key questions until the master plan becomes clear to the reader -- this approach works particularly well in the Chimera series.

The characters (both new and old) are well-written although they don't evolve much beyond their starting points. Granted, this makes tons of sense when you consider that the entire book takes place in roughly a week, but the characters sometimes toe the line between being interesting in their own right and treading water as mere plot ciphers.

More noticeable is the fact that the world-building takes a backseat in this outing. This is a fun "heist of the week" story that takes place in Cantagna -- the intricate foundation of societal structure, mysticism, and beliefs that the author established in Book One is no closer to culmination by the end. I would have appreciated a few more breadcrumbs to keep me invested. For example, we see the 'sniffers' in action many times, but are no closer to understanding their predicament or means of detection. Romy's visions of antiquity are obviously telegraphing something about future books, but the reveals relegated to the final pages of Book Two offer more questions than answers.

With calibrated expectations, there is a lot to love in A Conjuring of Assassins. This is a tasty morsel of a story that acts as a refreshing palate cleanser in between volumes of your favourite byzantine epic fantasy. Read it for the well-choreographed caper plot that doesn't fall back on a trite, neverending succession of backstabs to surprise. Read it for the main characters that realize they are made stronger through their trust and friendship and the supporting characters that are too delightfully complex to label as pure villains. Just don't be surprised if you reach the end and are left wanting, like a mid-season episode of Alias!