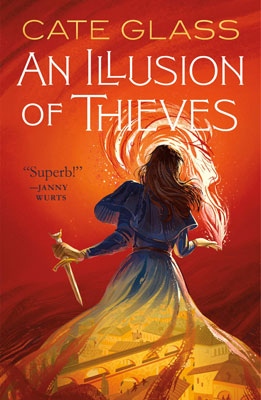 An Illusion of Thieves is the first book in a new series by established author, Carol Berg, writing under the pen name, Cate Glass. Set against a pseudo-Italian backdrop of city-states and political factions, the story centers on a young woman, Romy, whose position near the rich and powerful of the city is suddenly cast into jeopardy by family ties.

The tropes of the book (from a distrust of magic to a benevolent ruler with conspiring enemies) are familiar fare, but they are expertly pieced together to support the story and accessible enough to draw the attention of new fantasy readers. The world-building is obviously well thought out and the author does a fine job of mixing flashback, world-building detail, and present day action to avoid exposition overload.

The book is well-paced and divided into two major parts. The first part details Romy's return to poverty and her attempts to make it on her own. This section does a great job of developing Romy, her brother, and the ragtag personalities they meet along the way. Infrequent, tantalizing glimpses of political undercurrents and unrest within the city provide a global backdrop for Romy's character development and also serve as a neat writing device to emphasize her loss of access -- where once she would have known or influenced the actions of the powerful, now she can only theorize or seek out rumors about machinations out of her control.

In the second part of the book, Romy's shaky new beginnings are threatened by the world she left behind. To save herself and her brother, she enlists the help of new friends in a madcap caper. This section is a page-turner, spanning three days of nonstop action and lots of moving parts. The plot concludes in a very satisfying way, tying up all of the local loose threads while leaving enough of the world open for more books.

What I appreciated most about this book is its collection of light-hearted, easy-to-root-for protagonists. The development of the siblings' relationship is believable and the secondary characters add the right amount of color. While the characters sometimes suffer from guilt, shortsightedness, or other flaws, the angst and self-flagellation of Berg's Rai Kirah trilogy are nowhere to be found. The plot is also much more straightforward than the interwoven plots of Berg's Sanctuary duet. (I did enjoy those other series, but neither one can honestly be described as a "joyful romp").

An Illusion of Thieves is a book full of icebergs. What can be seen is delightful and satisfying but it is painfully apparent that there is so much more just below the surface that hasn't even been touched. Key aspects of the society, geography, and mythology are sprinkled throughout the story ready to be mined in a way that upends our perspectives (as Carol Berg is wont to do). While I was definitely happy with the wrap-up of the plot as a "one and done", I felt like too much of the world-building was left unexploited and reserved for Book Two and beyond. That said, I would definitely recommend Book One as a fast-paced, light-hearted break from your more somber fantasy epics.