With the millions of dollars gained by selling back 5 weeks of leave from my last job, I decided to get one last pre-adulthood extravagance and purchased an Oculus Rift. Of course, it arrived just two days before they dropped the price by $200. 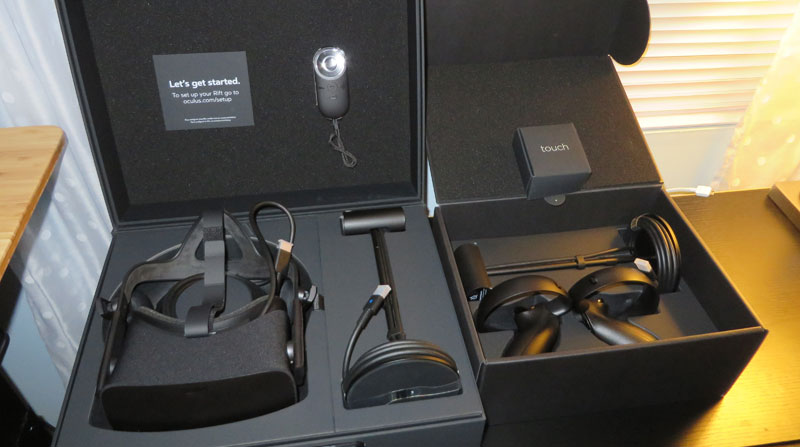 Not to sound like a shitty Ted Talk or anything, but virtual reality is finally here. After many false starts like those mall kiosks in the early 90s and awful 3D Televisions, the Oculus Rift is a high quality, consumer-grade solution that will change not only gaming, but also the way we interact with other people online. Using it for just a few minutes gave me a sense of technology awe that I haven't really experienced since the Wii first overpromised its motion controls and the whole world pretended that they had excellent tennis form for hours over Christmas 2006.

Though a little tedious to setup and a bit tight around the eyes for people wearing glasses, this first-generation tech feels polished enough to be second or third generation, and even runs great on my aged graphics card (GTX 960) which is one tier less than the minimum requirements on the box. The Touch controllers are a must as well, giving you a sensation of feeling and hand presence in the virtual world that the provided XBox controller does not.

I've been so busy with work recently that I've only had time to play in short bursts in the evening (mainly the free downloadable games available with my purchase):

Beyond gaming, sometimes it's just as enjoyable to launch Google Earth VR and stand on top of recreated landmarks like Half Dome or the Eiffel Tower.

I will do a full review once the hype has worn off, but I'm really sold on VR at the moment. The only drawbacks are when the illusion is broken by real world limitations, such as going out of range of a sensor, or reaching the edge of your physical room and having to reorient back to the middle.