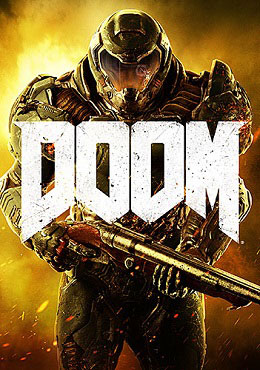 The latest iteration of DOOM is a solid first-person shooter with a high nostalgia quotient, marred by a few too many distractions and minor bugs. It immediately loses an eighth for reusing the title of the original to drive home the fact that it's a reboot, making it difficult to search for walkthroughs and tips online without getting diverted to twenty years of established wikis and articles.

I was never a fan of the direction that shooters evolved in the Half-Life years. Everyone was gushing about how interesting the story was in a boring ten-minute unskippable tram ride and all I wanted to do was kill things and find keycards to unlock doors hiding more things to kill. This iteration of DOOM gives me exactly what I want. The story is little more than a framework to hang the levels off of, and there is no need to pay attention to any of the (short but still irritating) unskippable cutscenes.

The graphics look great, albeit very monochromatic and Quake-like. I'm presuming that the art designer is colour-blind like me because there's no reason why there should be so many browns in any colour palette. The framerate never dropped once from 60 FPS in my playthrough on Ultra quality settings and I don't have the latest and greatest gaming machine (an i7 from 2011 and a GTX 960). This is also the first 3D game I've played where I found the overhead map to be usable and useful (unlike Skyrim, where it always looked like I was exploring a lichen).

The core gameplay is fast, frenetic, and draws inspiration directly from DOOM 1 and 2 while avoiding the weak horror story aspects of DOOM 3. This is not a game that can be played carefully and conservatively -- every single battle has you sprinting around small monster arenas with no safe places to regroup, and it's during these ridiculous battles that the game is at its best.

The main problem is that there are too many extra features that slow down this frenetic pace, to the point where you're spending just as much time on a loading screen or wading through menus of far too many weapon and armor upgrades, along with the usual assortment of collectibles that plague every modern game. Loading screens are especially noticeable on the bonus "Rune Trials" where you must accomplish challenges with low health and each failure requires a complete reload of the level.

The upgrades are interesting enough although they come at you too rapidly for you to really care about any single mod. Once I had upgraded my Combat Shotgun with an explosive mod, I really just got the rest of the mods so the game would stop reminding me that I had unspent points. There are also a massive number of death animations, but these "Glory Kills" got tiresome after a while and felt a bit too much like Quick Time Events.

The prime slow down is the exploration aspect -- for people that care about finding all of the secrets, you'll spend a lot of time not in battles, and the game gets noticeably less interesting. As a completionist gamer, I kept getting pulled out of my fighting rhythm to hunt for secret rooms. The fact that most maps have certain one-way passages preventing you from backtracking means that you either need to find all the secrets as you fight, or spend a lot of time replaying levels just to check all the boxes. Jumping and double-jumping also feel a bit loose (the polar opposite of the new Tomb Raider series), and I probably had as many deaths (and subsequent loading screens) from exploring as I did killing demons.

There are a few annoying bugs related to the menu UIs, and the occasional crash-to-desktop issue that's really grating since the game is on a checkpoint-save system. Usually, I didn't feel the urge to wait through loading screens and replay my past progress after a crash, and just stopped playing for a while. Sometimes it's difficult to tell when your shots are actually hitting an enemy, especially if you're firing something other than bullets and the enemy is in the midst of a jumping animation.

The bottom line? This game hits the the nostalgia mark perfectly if you grew up with DOOM 1 / 2, and you'll get the most out of it if you just fight through without stressing the exploration / upgrade aspects. I got a solid 12 hours of play time out of it and would definitely recommend it at a bargain bin price. $60 is way too high, but $20 - $40 seems just about right.

(I didn't play the multiplayer aspect because Overwatch just came out and its objective-based gameplay is much more fun than a traditional deathmatch).