Twenty years ago today, on May 27, 1995, I was at a regatta somewhere in New Jersey for the National Championships. A high school junior at the time, I was the coxswain for the TC Williams Lightweight 8, which meant that I was responsible for herding 8 cats crippled by various eating disorders due to the rules surrounding maximum and average rower weights. 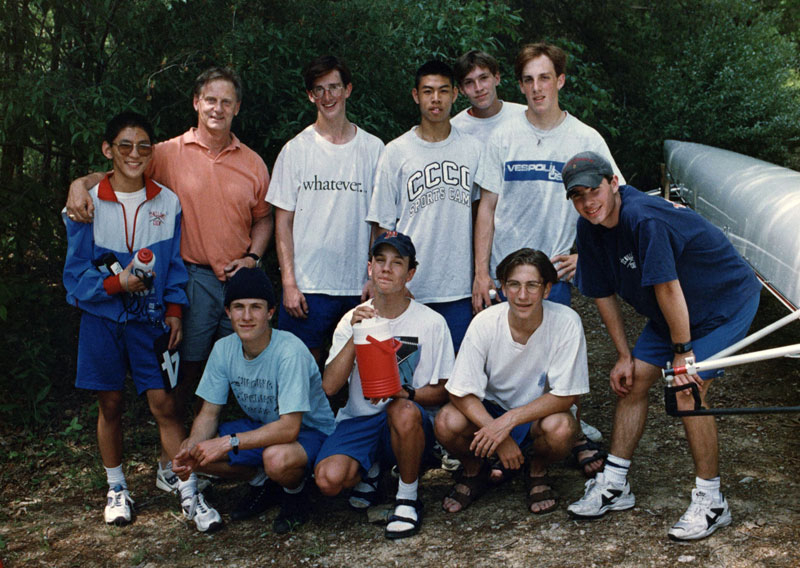 We had come in 3rd out of 4th in the qualifying heats the day before, which meant that we actually had race in the final round instead of sleeping the day away on the bus enjoying the time away from school. So, our day began with a bus to the weigh station at 5:30 AM, where our stroke failed the weigh-in by being HUGELY FAT (he was 146 pounds and the limit was 145). After a few circuits around the local park, he waded through the sea of worried lightweight girls spitting in cups to try again, and successfully passed this time.

We celebrated with breakfast at McDonald's.

Our final race kicked off at 12:40 in the afternoon, with Canisius, Woodbridge, Bonner, LaSalle, St. Joe's Prep, and TC in lanes 1 through 6 respectively. We came in fifth place, which was highly surprising given that our "cox box" stopped recording boat stats early on in the race. This was a crazy expensive piece of electronics that measured stroke rate and pressure, distance, and water temperature, and probably had a sonar add-on to measure water depth. When LCD display quietly flickered out 50 meters into the race, I did the only thing I could think of in a bind -- I simply made up my own numbers and speeds until the race was over five minutes later. I was converting meters and feet like a river-buoyant wizard, and it must have been close to accurate because none of the rowers noticed anything amiss after the fact.

At least by this point in my career, I was able to steer our boat (the Winifrede Beal Ottinger, colloquially known as the "Fred-e") in a straight line. Bonner was not so lucky, as their coxswain steered them into Woodbridge's lane, forcing Woodbridge to steer into Canisius' lane. After the race, Canisius protested Woodbridge and Woodbridge daisy-chained a protest over to Bonner. Owing to nepotism and intrigue (the judges were from Bonner's hometown of Philadelphia), Bonner's crooked course was deemed "not an issue" and Woodbridge was promptly disqualified from the race. This shuffled us up to fourth place while also having the side effect of allowing the 3 prep schools to walk away with the medals while the public school kids ended up with ribbons.

We spent the remainder of the day happy with our 4th place Nationals finish -- a direct antonym to the lightweight girls who also got fourth place but were incredibly pissed about it. I think we were just happy to be there, while they had just eliminated themselves from racing in Canada the following week.

Granted, they were probably a little bit hangry.