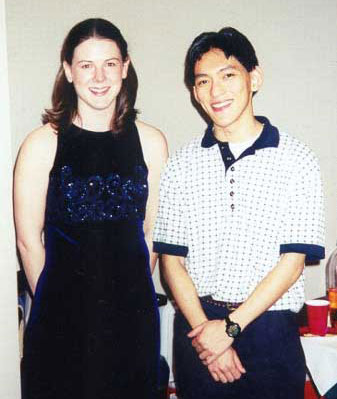 On Saturday, May 20, 2000, Paige was in town, visiting me at my parents' house in Alexandria. I had just finished the first week of my first internship at FGM, and on the Friday before, I picked her up at a random dead end in Leesburg (her car could not travel more than 10 miles without exploding, so her parents pushed her out of their moving car on their way to locales further north).

As a native of the DC area, I had already become jaded with the tourist grandeur of the area. So, the sightseeing agenda for this day consisted of easy-to-reach landmarks along the Blue Line which, even then, was the blue-haired stepchild of the Metro system. We hit Old Town Alexandria in the morning, where I showed off the million dollar boathouse funded by the Alexandria Crew Boosters and nestled in the armpit of eight blocks of ghettos, and followed it up with a trip past Arlington Cemetery (because no one actually gets off there).

In DC proper, we went to the Smithsonian for the only exhibit worth visiting: the Insect Zoo at the Natural History Museum (sponsored at the time by Orkin). We also went to an exhibit about pianos at the American History Museum, which probably would have been more exciting had it been about brass instruments. After a classy late lunch at the Food Court in Pentagon City, we returned home to watch Usual Suspects and eat cereal.

I also may have tried to get her to read Janny Wurts, but I think she hated it like everyone else who is not specifically me.