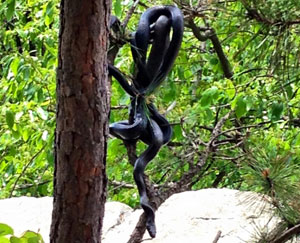 On Saturday, Rebecca went hiking along the Appalachian Trail at Snickers Gap (no Snickers bars were involved, contrary to the name), where the woods were overrun with snakes enjoying the warmth and banging in the trees. I stayed home to do the bi-weekly Costco run, and then worked on proposals in the afternoon.

On Sunday, Rebecca and her posse did a "Color Run" at National Harbor, where spectators throw random pastels at you as you run, as if having to run 5 kilometers on a Sunday morning wasn't punishment enough. Now there is glitter everywhere -- glitter in the rug, glitter on the cats, glitter in her hair. There's no longer need for nightlights because the carpet sparkles gently in the moonlight as you glide down the hall to the bathroom.

In the afternoon, we had gyros and subs from Joe's Pizzaria and finished the fourth season of Game of Thrones, which showed surprising improvement over the music video attention span scenes of the third season.