Nine years ago today, I had the first Texas Hold'em Game of the 2006 series. Poker was just starting to gain in popularity in my "circles" (which I invented before Google+), so this tournament was nothing like the highly organized games of later years. I originally expected this to be an eight-person game so someone must have dropped out at the last minute, probably Eric B.

2006 would ultimate end up being a 6-game series in which I never ranked higher than second place, as evinced by the game record I kept on the whiteboard all year long. To rectify this, I have reranked everyone who played in this historic first game in order of the last time I saw them. 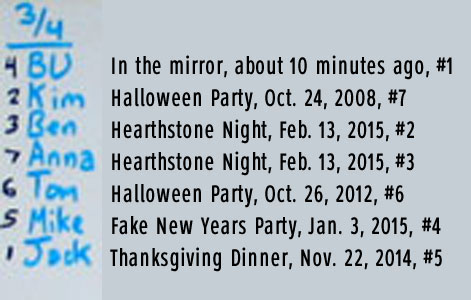