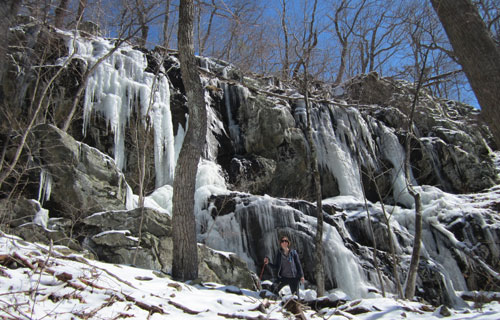 We got away for an early spring road trip this weekend, leaving the cats at home with the dry food auto-feeder from which Booty spends the entire weekend finagling one pellet of food per hour. Our destination was Hopkins Ordinary, and bed & breakfast in Sperryville, Virginia. We got there around 9 on Friday night, full of Subway, and enjoyed a complimentary pint of beer from the Aleworks in the basement before calling it a night.

On Saturday, we got up for a healthy, organic breakfast accompanied by classic, organic jazz combo music. With the unexpected snow storm just two days earlier, our plans to hike Old Rag were abandoned, in favor of a more snow-amenable hike at White Oak Canyon. Another couple at the B&B were planning this same adventure, but we never saw them for the rest of the day after breakfast, so they must have gone elsewhere (worried about hiking awkwardly ahead or behind us all day long).

The hike was a bit messy, with pristine snow on the way up and a slushy Slip'n'Slide on the way back down as temperatures climbed up to 50. There were a few unexpected stream fordings required, but thankfully I was wearing rain boots so I wouldn't have to complain about wet feet (given the choice between footwear built for hiking or dry feet, I will choose dry feet every time, even at the expense of my calf muscles).

On the way back, we passed an alert collared dog in the middle of a country road who begrudgingly went to the shoulder as we passed, only to walk back out into the middle of the road afterwards. Curiosity aroused by this behavior, I watched him in the rear-view mirror and found that he was playing crossing guard for an orange cat. The two rejoined on the other side of the road and disappeared into the brush -- it was very Incredible Journey-esque.

In the afternoon, we visited Ducard Vineyards, which had good reds and forgettable whites, and the Hopkins Ordinary Aleworks, a microbrewery run by our B&B hosts. Unlike the peculiar "dandelion wine" served at a previous B&B, this microbrewery was the real deal, with an excellent variety of beers, including an IPA, a brown, a saison, a rye, and a blonde. Each was memorable, and the flight was just as good, if not better, than the many budding breweries in Loudoun County.

We ate dinner at Thornton River Grille, a surprisingly expensive little restaurant in Sperryville which had the saving grace of being across the street from our beds. I ate the duck, which was a mistake, because the duck is never as good as you hope it will be.

On Sunday, we meandered back northward, stopping for sandwiches at 24 Crowes, and a wine tasting at Rappahannock Cellars, and then came home to do laundry. Rebecca did kitchen-yoga while I studied for my upcoming AWS certification exam, and then we finally started the third season of House of Cards.