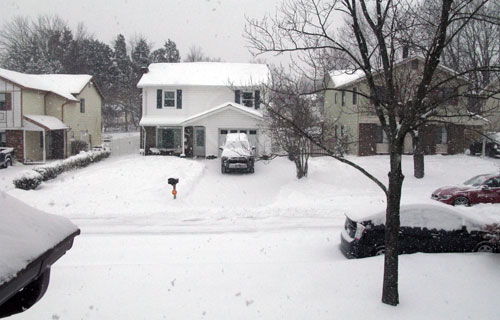 On Friday night, we stayed in with gyros and wings from Joe's Pizzaria and started the show, Sherlock. We tend to fall on the extreme ends of the television show hipster spectrum -- either we discover shows that no one is watching yet like a normal hipster, or we enjoy a show like Sherlock only to find that everyone else liked it five years ago and doesn't care about it anymore.

The rest of the weekend was snowbound, with Sterling getting about 8 inches before it switched over to sleet. We did some shoveling, cancelled our Saturday night plans with Katie and Joe, rewatched the movie, Awakenings, which Rebecca had never seen, and played some games.

On Sunday, the snow melted enough for us to go to the Cranes for the Oscars and some Chipotle, but we left early before any award of note had been given -- the show felt particularly boring and sterile this year. Neil Patrick Harris has done some great hosting in the past, but last night's Oscars kind of felt like he was once again hosting the Tony Awards.