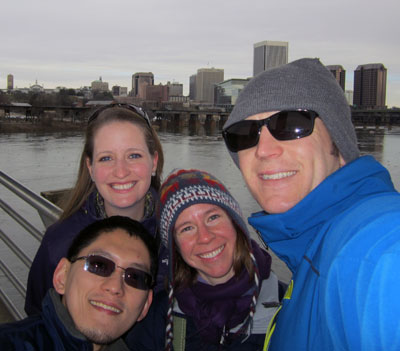 We got out of town this weekend, driving south to see our friends, Sam and Kristen, in the city of Richmond. After seeing their cozy basement apartment, we went to Lunch. for brunch. However, Lunch. was packed, so we ended up next door at Supper! for brunch instead (I had an omelet with grilled bison and mushrooms).

Following a tasting at Ardent Craft Ales, Sam introduced us to the magic of Ubering around the city. We toured the Virginia Museum of Fine Art while they went to the VCU basketball game. The art was artsy, as they had a good selection of both old and new stuff. Rebecca was unimpressed by Art Deco and Art Nouveau, and their Photography exhibit turned out to be a small row of old black and white portraits next to the bathroom. However, admission was free, which always buys plenty of goodwill.

In the evening, we ate Mexican food at En Su Boca, saw a little live music at the Hardywood Park brewery, and then went to The National to see Ingrid Michaelson perform. Her live act matched the quality of her albums, in spite of the drunk sorority girls having loud conversations behind us at the bar. The only downside of the concert was that she only performed for a little over an hour -- this would have been less annoying had Ticketmaster not charged a 40% surcharge for a $20 ticket. We had post-concert appetizers and yet another restaurant somewhere in Richmond and then retired for the night.

On Sunday, we had brunch at Saison Market, walked around Belle Isle where we met a crazy guy who was copyrighting "Indian Rock Sculptures" (extra emphasis on air quotes) he had "discovered" in the brush. I doubt an Indian actually carved that boulder, but it did kind of look like a frog if you turned your head, squinted, and painted a frog on it.

We ended our Richmond adventure at Sugar Shack, where the line was out the door for delicacies such as maple-bacon doughnuts and doughnuts with pieces of fried chicken on top. Afterwards, we made it back to Sterling in record time (1hr 35min), just in time for a small Super Bowl party at the Cranes. We left during the third quarter because responsible people need to get ready for work, but greatly enjoyed the sharks.