Based on readers' topic suggestions

Why do many people refuse to drive with their lights on in the rain?

It's a phenomenon that most drivers have experienced at least once -- driving in moderate to heavy rain and coming up quickly on a driver whose bland-coloured car (often a Toyota) is nearly invisible against the backdrop of muted daylight and scattered raindrops. Since cloaking technology (and the hoverboard) is still at least eight months away from fruition1, there must be a more mundane reason behind these drivers' decision to place you at risk by making their car harder to spot.

In today's lecture, we will explore the social and physical roots of this behaviour. Why do people do this?

Is it political? No.

Turning on your lights and making your car visible to other drivers in the rain is a recognized and useful safety practice, as evinced by the 19 forward-thinking states who have some variant of "wipers on, lights on" in their law books. Our intial hypothesis was that those states with laws might fall along political divisions, but as you can see from the map below, there is a statistically insignificant2 difference between red and blue states with "lights on" laws. (The lawless states are solid colors, while the lawful states look like glass ornaments from a 1980s Make It and Bake It oven). 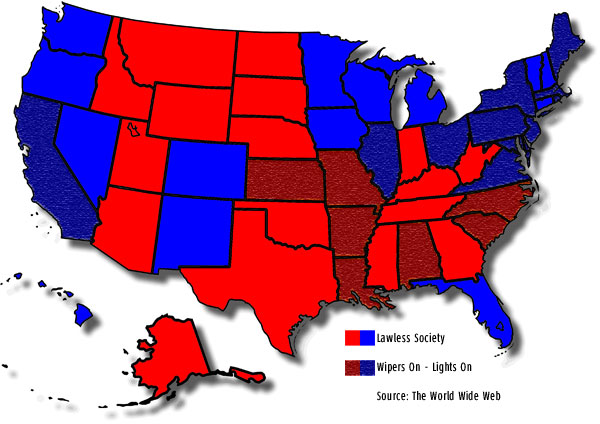 In spite of this lack of conclusion, overlaying various data sets onto a map is a critical activity in big data and trend detection, so we also compared the data against maps of average US rainfall, Nielsen ratings for The Bachelor, day length, and headlight pricing data for the past 50 years. No discernable correlations were discovered, although we did determine that this is mostly an Eastern practice3. (The data from California can be discarded because hippies).

Is it science? Partly.

As cars evolve over time to be more curvy and less boxy, the geometric slope of the windshield has decreased. This is a shady trick by car companies to simultaneously increase the advertised volume of the cabin (albeit with completely useless space) while also making it a pain in the ass to remove your tax and inspection stickers every year.

When rain falls against a more modern windshield, it bounces further towards the front of the car. If headlights are on in this situation, the errant raindrops will diffuse, reflect, and / or refract the potentially blinding light back at the driver, putting them in a dangerous situation comparable to driving through the Windows 3.1 Starfield screensaver4. Surely some drivers opt to leave their headlights off to avoid this, at the expense of all other drivers.

Is it cultural? Yes.

The cultural reason for why people don't turn on their lights in the rain is actually the same as the dearth of turn signal usage -- it's not that people are assholes (most are), so much as they are just completely oblivious to the impact of their actions on the people around them. Daytime headlights, like gift cards to Applebees, are really intended for other people, not yourself.

The good news is that car makers have been phasing in daytime-running lights for many years now. Ten years from now, everyone's lights will be on all of the time (with the exception of that Ford Escort your redneck friend has been replacing the engine in since 1981).

1 Source: Back to the Future II.
2 Source: Did some math on Windows Calculator in Scientific mode.
3 Work not shown. You only show work when you are not confident in your final answer.
4 Source: That guy in your dorm that often took interstate road trips while on acid.