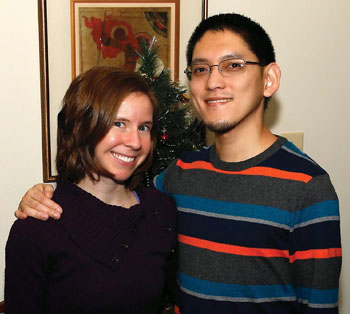 I only created two pages worth of funny captions this year because of Reuters. They trimmed their normal selection of over a hundred images to about fifty, mostly of people crying, dying, or getting blown up, and then added unskippable interstitial ads to the slideshow. It's hard to keep things light under those circumstances.

Christmas Vacation so far has been quiet. After a Riverside service on Christmas Eve followed by the Muppet Christmas Carol, we had Christmas morning at home and then visited my parents in Alexandria briefly before converging on my sister's place in Maryland for a final Christmas celebration before they flee to Rhode Island. During the festivities, Rebecca was overtaken by a flu variant she had picked up from work, made more virulent with the bitterness of old peoples' tears. We left early and I put her to bed with a 103 temperature.

The flu kept her down through Sunday night, and I caught it myself on Saturday morning. Although she was able to get back to work by Monday, I've been at home unable to do anything useful since Saturday. Being sick involves lots of sleeping and watching things. Among the things I watched: the complete Toy Story trilogy, two Kevin Kline movies from the 90s, the first season of Mozart in the Jungle, episodes of Modern Family, Season One, and episodes of Newsroom, Season Two. Among the places I slept: my bed, the guest bed, the couch, and the floor of the office.

We don't have any crazy New Years plans tonight, since Rebecca works tomorrow, but I'll probably make some steaks and cough on everyone.

New pictures have been added to the Life, 2014 album. Happy New Year!