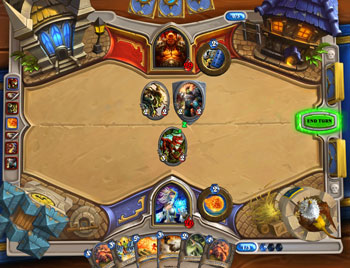 Hearthstone is a new turn-based card game based on the setting and characters of World of Warcraft. It's currently in free open beta (downloadable from battle.net), and has a lot of promise. The game has a simple set of rules that frames a reasonable strategic depth, and a shallow learning curve that eliminates the need for taking an academic semester just to enjoy your first game.

Warcraft fans will appreciate the amount of lore worked into the game, but there's still a fun card game under the hood for casual gamers -- it would be just as fun with any other intellectual property as a theme. Maybe not LOST though, because you'd just play the card to send your opponent skipping through time and then win with regret in your heart for having invested so much time with so little payoff.

Hearthstone apparently has a lot of similarities with Magic: The Gathering, another card game that I never got into for two good reasons: 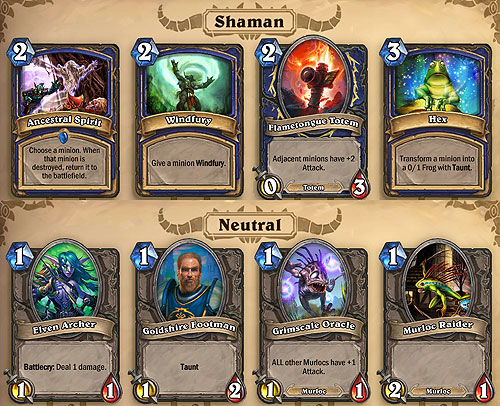 The goal of the game is to play cards that ultimately reduce your opponent's health to 0. Cards are a mix of one-use magic spells and minions that will do your fighting for you. Each card has a mana cost, and each round gives you a little more mana to play your more powerful cards. Rounds feel very logic puzzle-y as you try to eliminate your opponent's minions while keeping as many of yours alive as possible, and the fact that the game is online means that you aren't wasting momentum checking simple arithmetic (was bowling fun before computers?). Unlike Monopoly, there's a good balance between real strategy and random chance, so even an amateur has a fighting chance in every encounter.

There are 3 options for playing: Practice mode against the computer, Play mode where you construct your own card deck from the best cards you have earned, and then use it against a random player (earning gold so you can buy more cards), and Arena mode where both opponents pay gold to challenge each other with equally random decks for gold and bragging rights. The game is free-to-play, although you can elect to pay real money to buy card decks faster, or jump into the Arena more often.

Based on about a week of play time, I'm enjoying Hearthstone. It requires minimal commitment, maybe 10 minutes per game, and the turn-based approach means that I don't automatically lose due to my aging reflexes. The whole package playfully captures the Warcraft vibe well -- unlike other recent Blizzard games, it has not been irrevocably polished into boredom. The smaller development team has crafted a game that's slightly unpolished, but obviously built with love, and the game runs equally well on my desktop and game-crippled laptop. The UI is really the only annoyance -- there's a little too much clicking in the menu screens, and the chatting interface is supremely awful. Blizzard regularly fails at anything social, though. The only way that could be worse would be if it required you to login with a Google+ account.

Initial Grade: B+, worth a try!