My 3DS XL purchase was more a whim than a need -- there were no good computer games on the market at the time, and the 3DS had reached the maturity level where there were a ton of good games available. Plus, there are only so many trips to Popeyes you can spend your massive amounts of disposable wealth on. Previously, my only reason not to buy it was the worry that it would give me migraines all day long. Thankfully, this worry has not materialized in the least. 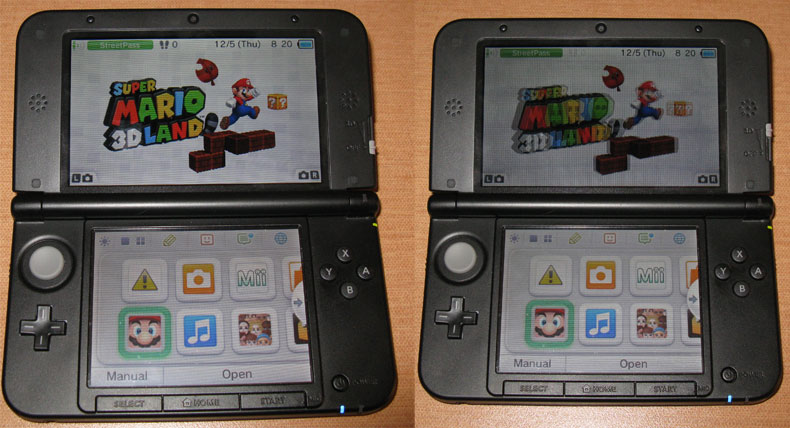 The 3DS is a surprisingly safe evolution of the DS Lite. Besides the 3D, nothing about it is disruptive technology. There's still a touch screen on the bottom with a stylus tucked away in a hidden sphincter. The circle movement key on the left feels comfortable and is responsive.

3D is achieved by displaying two separate images to the left and right eye. No special glasses or super-concentration is needed to see the effect, so even people who can't see those gibberish 3D mind images will be able to enjoy it. The effect can be increased or turned off with a slider control, which also helps to support different viewing distances. When 3D is enabled, you get an immediate sense of depth that really helps with immersion. And so far, (unlike every other gimmick Nintendo has introduced, like motion controls), it has not been needlessly abused in any of the games I've played.

I've been satisfied with all three starter games I picked up: Super Mario 3D Land, Fire Emblem: Awakening, and Legend of Zelda: A Link Between Worlds. (These games will get their own reviews on another day). I've been even more satisfied that the console isn't migraine-inducing, although every game tediously tells you to rest every 45 minutes or so. Battery power has been fine -- I've never gone more than about 5 hours without charging it, but it has never run out early.

In fact, there are only a few minor nitpicks that detract from the experience: