On June 5, 1996, my senior year of high school was coming to a close, so I took the day off and went into work with my dad. The purpose of this trip was an interview at the nearby PEPCO headquarters, after which I accepted my infamous "computer science internship without any computers".

By the way, Whitney wrote in my yearbook that I'm a fun guy when I'm not so shy. Adrienne wrote that she was glad she got to know me better and Ada wrote that I'm an incredibly nice and very funny person.

On June 5, 1999, I went to the T.C. Williams senior prom and wore musical suspenders. Everyone says that juniors must be really cool to get to go to the senior prom, but that probably doesn't apply to juniors in college. 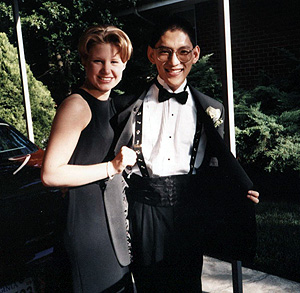 On June 5, 2003, I had recently started working full-time at FGM. I spent the first few months on a dead-end project where we evaluated a commercial product for features that it did not do, while the high-paid traveling sales consultants tried to convince us that it did. While taking the opportunity offered by the dearth of real work to learn JASS to write Warcraft III maps, I received this email from Kathy, who was working as a receptionist in Florida.

Yes, I'm at work. It's slow, very slow. I finished the book I brought with me. I've heard the new Clay Aiken (from American Idol) song on the radio twice today and that makes me happy. I think it was just released.

Hope you're having a good day!
Kathy

On June 5, 2004, I had a housewarming party and got a pool-table-shaped clock from Evil Mike, who was formerly known as Jaood. Also, my front yard was covered in plants. 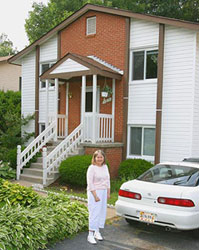