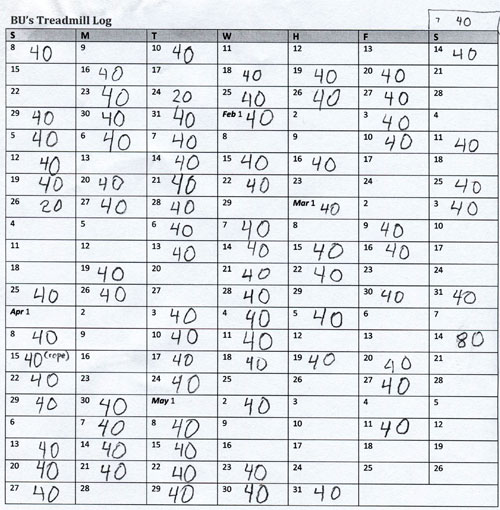 I previously reviewed the Horizon T202 Treadmill in our basement back in March. We've now owned the beast for five months, and it's played a successful role in my continuing quest to eliminate all outdoor activities from my life.

At the beginning of 2012, I set the attainable goal of walking or running for 2 hours per week, and then met or exceeded expectations every week since. Given that my former level of exercise was 0 hours per year, the 56 hours of walking and running so far this year has been a nice bonus. I have also dropped 9 pounds, and since all weight loss can be extrapolated linearly, I expect to hit my eighth grade coxswain weight in January 2014, and my birth weight about four years after that. The chart below shows my activity for the first five months of 2012: 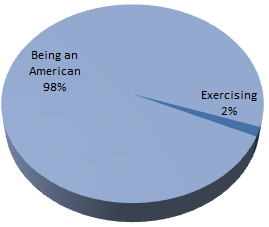 This experiment has also shown that the motivation to exercise plays a minimal part in a consistent workout schedule. Instead, the key ingredient is a worthwhile set of TV shows to watch. I overachieved on exercise when rewatching the Dollhouse series, but could barely crank out 2 hours during season 2 of 24. In the only two excessively good episodes during that season, I actually stayed on the treadmill for an extra 40 minutes because I wanted to keep watching.

If just watching TV isn't sufficient motivation, I'm sure it would be harmless to have a snack too. Bacon-wrapped scallops are bite-sized and not too messy.