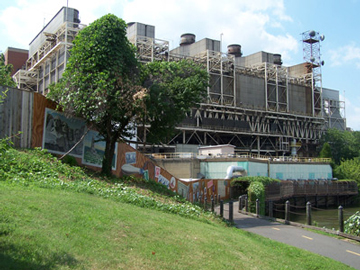 My first job, paying $5.50 an hour, was an internship at Potomac Electric Power. It was just after high school graduation sixteen years ago, and took place in the aging power plant that looked as if it would tumble into the Potomac River during a mild earthquake. I was too young to legally have a job the summer before, and did nothing during my senior year other than occasional Alexandria Symphony stage crew gigs (and our family was of the "your job is to be in school" mentality).

As I've mentioned in previous posts, the PEPCO internship was billed as a computer-oriented position for an up and coming computer science major. I arrived at work at 7 AM every morning, had 30 minutes for lunch, and then left at 3:30 PM. In general, I just did the leftover work that none of the four secretaries wanted to do (and the fact that it took four secretaries to work a front office totaling ten people should have been an early warning sign that this was not going to be the next Apple). Here are the tasks that comprised my average day:

Entering "Fly Ash" Tickets
Each truck that brought coal to the plant was weighed on its way in and out, to determine the net weight of the coal. My job was to take the handwritten carbon copies and type them into the PEPCO mainframe so someone else could run a report. Generally there were about 30 tickets a day, and the mainframe took 5 minutes to login. Total Time: 20 minutes

Typing up Purchase Orders
When people around the plant needed equipment, they would fill out a triplicate order form (the white-yellow-pink variety). I would then take this information and type it onto a new triplicate order form of the same variety with the office typewriter. I never figured out why they wasted a real form on the handwritten copy, but I was not paid to seek efficiencies. I typed 2 or 3 orders per day. Total Time: 20 minutes

Printing Reports
Once I finally had a computer, I would occasionally be called upon to open up corporate memos or documents on the fileserver and print copies of them for the managers. Total Time: 5 minutes

Delivering Mail
This was a task that the full-time secretaries were glad to offload. The plant received US and inter-office mail for 100 different people, and my job was to sort and deliver the mail into a massive wall of cubbyholes. The problem was that the wall of cubbyholes was not alphabetical -- it was sorted with the lead plant worker in the top row, and his team in the slots below him. Total Time: On the first day, it took me 2 hours. On the second day, I created a mapping grid with the names listed alphabetically followed by their location in the mailbox grid, and hung it on the wall. Subsequently it took 20 minutes.

Lunch
Two baloney and Miracle Whip sandwiches on white bread, a brownie, and an apple (in the days before I became allergic to fruit skins). Total Time: 15 minutes

It is left as an exercise to the reader to figure out what I did with the other 7 hours of the workday. It is an exercise I had to endure daily for the entire summer.