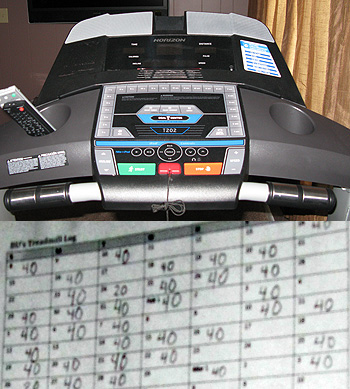 Fast forward to 2012, where there is now a $700 treadmill by our basement TV which makes exercising an easy habit to get into. I set myself an initial goal of walking/jogging/running for 2 hours a week, and have ended up doing far more without any prodding. This exercise has already made me lose 4 pounds, which shows that my metabolism has not yet slowed -- it was just hiding.

We ordered the Horizon T202 through Amazon for painless scheduled curbside delivery and then navigated it into the basement with my parents' help. It was easy to assemble (requiring more than a single person because of its weight) and slightly less easy to calibrate. The T202 is a folding treadmill, which reduces its profile, but doesn't really give you much more space. It's very sturdy, but we are tiny people, so even plywood is sturdy underneath us.

You can set up workouts based on time, distance, and calories, or just go into manual mode and control the incline (up to 12%) and speed (up to 12 MPH). There are also iPod controls and speakers, which I never use, and a heartbeat monitor, which I'm not sure I trust. Apparently you can create long-term fitness goals as well, but all I really use it for is a mechanism to keep me moving for bit every day.

Other than an annoying, ear-shattering beep when the treadmill is turned on, I've found no faults with this unit in the two months I've been using it. I would definitely recommend it.