Thank goodness Skyrim came out, because I was sick of digging holes in Terraria but just couldn't stop myself. This big-budget role-playing game is easily the most fun I've had with a game in years. It is flawed, but the game generates a lot of good will against these flaws through its fun factor.

I've now played through the game about one and a half times, once as a sneaky mage that could steal all of your jewels and then surprise you with a fireball, and then once as a pure thief/archer character. I am obsessive about mapping in these games, and on my first pass through, I decided to explore every inch of the map and beat every available dungeon before proceeding too far into the main storyline -- it probably took me about 100 hours to see and do everything the game had to offer.

The world of Skyrim is as close as you can come to a living world in a game. It feels like the land and the people continue to exist even when you aren't questing. One example of this craft is an abandoned lighthouse filled with journals of the former lighthouse keepers. As you explore the lighthouse, you learn that they were hearing strange noises in the basement before they disappeared, and you finally uncover the cause of their deaths in an underground burrow behind the cellar. What makes this amazing is that you might never visit this lighthouse in the course of the game -- it's there for the discovering, and is one of many such mini-stories. Most game designers would probably be so thrilled that they made this mini-story that they'd send you past the lighthouse as part of your main quest, just so their work would be noticed.

The main storyline is decent and not cringe-worthy, but it takes up a very small portion of playtime. If you run the main storyline and nothing else, you'll miss most of the best content in the game, from joining the Thieves' Guild to recovering artifacts for ancient crazy gods. I liked the story, but was underwhelmed by the brevity of the ending, which is essentially equivalent to a 1980s "THANKS FOR PLAYING!" screen that then kicks you back into the world to keep playing.

The graphics and sound are top-notch, and go a long way towards immersion. It ran smoothly on my somewhat-new system and only stuttered in a cave filled with about 50 waterfalls. The voice-acting is decent, although one of the voice actors has a raspy voice and is noticeably reused for over twenty characters. I tend to turn on text and read the dialogue anyhow, because I always get impatient.

The leveling and skill systems are an interesting experiment that boils down the usual numbers games into health, magic, and stamina. Rather than picking a class upfront, your skills improve as you use them more often, so you can create any sort of character you want. (Although you can spend hours adjusting the width and height of your character's NOSE, it's a wasted effort because you're rarely watching your own face during the game). If you start out swinging two-handed swords and then realize that swords are dumb, you can easily switch over to magic rather than restart your game from the beginning. There is no discernable Good/Evil system -- but you can pretend that there is one by selecting different dialogue options (that usually end up with the same result). The skill trees are half-baked, as some perk selections are obviously better than others, and some skills, like lockpicking, feel essential even if you don't want to roleplay that way. The UI for the skill trees is easily the worst UI ever designed, and might have been some art design major's senior Flash project.

The UI in general is the weakest piece of Skyrim. Since this game was released on the XBox 360 and the PS3 at the same time as the PC, the PC interface (keyboard + mouse) seems tacked on. It's amazing how unresponsive they've made the mouse, especially when clicking directly on dialogue options. The character management screens are an unending parade of menus and submenus which make it impossible to sort your goods, compare items, or have much situational awareness about your condition (when you're poisoned, it shows up in a completely unintuitive location). On the PC, some of these woes are alleviated through addons like QD Inventory, but I feel like they tried to hide too many numbers for immersion's sake and went too far.

The in-game maps are useless, since everything is in 3D. You can toggle between an up-close map with too much detail to figure out what's going on, and a high-level 3D world map that is covered with artistic clouds and hides many landmarks behind mountains. A top-down map for the overworld, coupled with a 3D map for dungeons (like the Wii Metroid series) would had been much more useful. However, you'll rarely ever get lost in a dungeon, as there's usually only one path to the end. Dungeons get bonus points for having shortcut paths back to the beginning so you don't spend all your time backtracking after killing a boss.

People always say that games made by Bethesda are immensely buggy, but I haven't seen as many game-breaking bugs as others. When you partner with computer characters for quests, they have the bad habit of standing in the way of your fireballs and then complaining when they burn, but that's a problem in every game with escort quests ever. Most of the bugs I saw came from exploring places before I was sent there for quests, but I was able to get around these issues with console commands. I also experienced at least one crash-to-desktop per day, but Skyrim has the fastest save/load system ever, so it was no skin off my back to restart the game. It's a far cry from the Ultima 7 Part 2 days where a crash to desktop meant waiting four minutes and forty-two seconds to reload (I timed it).

Ultimately, the fun factor of this game is what makes it worth the price. Skyrim is a highly replayable single-player RPG which is wholly open-ended without just being a sandbox game. Whether I was trying to shoot a dragon out of the sky with just a bow and arrow, burglarizing every house in Riverwood, or sleuthing after a serial killer in Windhelm, I was always having a great time. 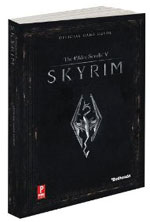 Skyrim: Prima Official Game Guide:
I haven't bought a printed gaming guide since the ancient days of Quest for Clues, where you had to buy a bundled set of 24 game walkthroughs to read about the single game you actually owned. In the days of Google, GameFAQs, and WoWHead, print guides are obsolete. However, this guide is easily worth its $17 price tag (cheaper than many Kindle books these days). It's a jam-packed 656 pages with tiny fonts, detailing every quest, cavern, and item in the game, right down to the hidden chest you might find in a tree stump in the middle of nowhere.

The care and effort that went into this game guide shows, and its checklists are very useful for keeping all of the information straight. I used it more to keep track of things than to figure out where to go next, but whenever I was stuck, I always found the answers here. The book is a little hard to search, and there are a few minor errors (like levers that are actually on opposite walls) but I would definitely recommend it.