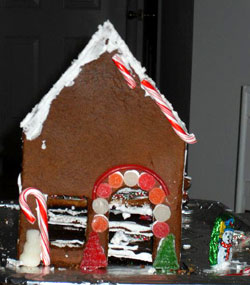 This weekend was one of the most social we've had in awhile. Now that Rebecca has finished her semester and aced her exams (which consisted of completely taking apart people who volunteered to be in a study and putting them back together again), we actually left the house on more than one occasion. The weekend opened with Gingerbread Night at Emily and Evil Brian's house. The representative image on the right shows how well-constructed our house was -- in no way did it completely collapse except for one wall when we started putting the shingles on.

On Saturday, we watched The Hangover, Part II, which I felt was better than most sequels, but no better than the original. Ed Helms making up songs in everything he does is getting as old as Jason Segel doing the same thing. Our evening became unexpectedly free when a holiday party in the sticks was cancelled, so we headed to the Reston Town Center for dinner and ice skating instead.

We started out at Jackson's, but after refusing to join the patient group of yuppies willing to wait forty minutes for a table, we ended up at Uno's for a five minute wait and some deep dish pizzas. The restaurant was cold because none of the patrons had learned the purpose of a vestibule in public school and kept a healthy breeze going as they entered, exited, or waited in the doorway for their party of 13 to be seated. By the end of the meal, we were too cold to ice skate. We briefly considered going to the movie theatre, but ultimately ended up back at home for a game of Khet 2.0, which is like chess but with laser beams that you shoot at your opponent's pieces between each turn.

On Sunday, we headed to Falls Church to visit with some of Rebecca's extended family that was in town. We caught the fourth Advent service at the Presby church (which ended on a surprisingly dissonant note with an organ piece by Olivier Messiaen) and then sat in holiday shopper traffic to get to Panera for lunch. We then segued into another holiday party with Anamaria and Henry in real Falls Church before going to Rebecca's parents' house in fake Falls Church for some German packages with bits of sausage in them.

"Whatever" deemed the most annoying word