the most exciting thing on the way to Baltimore is Scaggsville

♠ The volunteer midnight shifts have come to a close now that the 24/7 exercise of the software we inherited is over. Not that I know anything about the conditions that the previous developers worked under, but it seems like a reasonable requirement to expect that resetting someone's password should not require VPN access, a server command line, and a set of database scripts. It would have been nice if they had thrown fifty bucks at the problem and put a Reset Password feature on the website itself -- look, I can reset your password here with minimal development costs.

♠ Since only a handful of password requests came in at night, mostly from faraway countries like California, I spent much of my shifts wandering the tomb-silent halls of the building (silent but for the wide screen TVs blaring CNN all night long every 50 feet), burning kindling to keeping warm after the central heat shut off, and catching the occasional nap under the near-diurnal glow of fluorescent lights.

♠ I suddenly have a plethora of free time. Now that winter is approaching and the days are getting shorter and colder, I'll have to switch from summer activities (sitting at the computer) to winter activities (sitting at the computer with a space heater). Historically, this has been the season where I blow fifty bucks on a new role-playing game and hope that it keeps my attention (see also, World of Warcraft and Torchlight). Usually though, I get bored after a few days or weeks (see also, Dragon Age: Origins, Dragon Quest XI). Or, maybe the lesson learned is that I should avoid games with "Dragon" in the title. 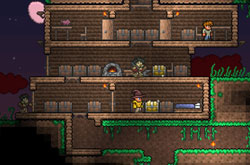 ♠ In the meantime I've been playing Terraria, which is far superior to Minecraft in the genre of "virtual hole digging and cave exploration", but these games are less about enjoying the experience and more about mindless relaxation and/or addiction. Like a Law and Order marathon or a minor in Mathematics, it's very easy to let something like this fill the downtime in my schedule, but I don't have much to show for it after the fact.

♠ Looking back at my Math minor, I can safely say that my retention level after eleven years away from the material is as close to zero as it could be without actually being zero (In Calculus terminology, that means that the limit is 0, but I learned that in high school). Drawing on my strong powers of recall, I can only remember something about pigeons in holes, the Math Emporium, and a shy professor who got hit by a car while biking to school and arrived at later lectures limping with bandages.

Sperm Whales Really Do Learn From Each Other

Eagles gang up on paraglider