a dramatically fluctuating wavelength of awesome 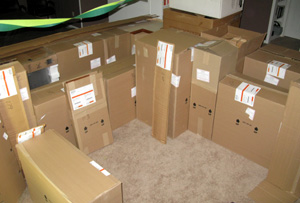 ♠ Our basement is currently filled to the brim with the detritus of human consumerism, since our Naughty Alder cabinets arrived on Wednesday afternoon and are currently crashing rent-free next to the stainless steel appliances, including a dishwasher which will replace the current anemic appliance which could be more aptly described as a dishdampener. It doesn't actually clean the plates anymore -- it just soaks them thoroughly and heats them to a temperature incapable of aiding in water evaporation.

♠ On the porch is the new Weber Spirit grill with cast iron cooktop, which replaces the 7-year-old Char Broil special which survived with only 2 burners for the past 6.5 years and dripped grease all over the deck. Mike (of Mike and Chompy) also owns this grill, and I've heard that when people in New Hampshire own something, it's definitely top quality.

♠ We grilled steaks on Wednesday night to break in the grill, and both came out perfectly, with a minimum of oversight -- this grill resembles what I would want my employees to be like if I had the patience to own a business.

♠ Speaking of work, I am ending my 7-year stint on the Metadata Registry and moving into a role that bridges the Department of Defense, Intelligence Community, and others, and was described to me as "listening to highly technical people describe what they want, and translating it into non-technical jargon to get things done". There won't be any Java development here, but it's good career experience and will keep me from getting pigeonholed, and anyone who has ever taken Discrete Mathematics knows that pigeonholing is lame.

♠ Plans for the weekend include a stop to see my visiting sister and nephew this evening, followed by a few hours of work over the weekend to wrap up some old job stuff before moving on to the new job. Beyond that, the weekend looks pretty light, so perhaps we'll take an overnight trip to Maui or have an impromptu grilling party.

Fed up with Phoenix, Tucson talks secession from Arizona

Excuse me, but aren't we brothers?