the thrilling conclusion to Questions Day 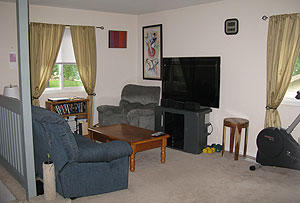 "How often do you rearrange your living room, and is it just to get a new vantage of things and keep thing fresh or because you think the setup works better?" - Evil Mike

The living room actually hasn't been rearranged for about two years now, and has only been in two basic configurations since my 2004 Rearrange My Living Room contest. The main hurdle in my urge to rearrange is that as televisions get wider, the number of places where they can be in the room without blocking a window decreases. The alternate configuration, which puts the TV against the inner wall is nicer looking, but puts the couch so far away that you have to turn the volume all the way up to hear anything, and then it echoes like my parents' house when they're watching CNN in the morning.

"If you could be shrunk down to the size of a cell and injected into someone like that guy in the movie Innerspace, who would you want to be injected into?" - Steven

It would have to be someone who exercises regularly enough to not have clogged arteries, because I sit in enough traffic in the real world. They should also have done a wide variety of recreational drugs, so all of the bizarre mutations floating around in there would look cool in my tourist snapshots.

"If you had to rank them what would be your top 5 loved/favorite video games?" - Evil Mike

In no particular order:

I came up with this Starcraft handle one evening in 1998, when everyone was sitting around in a chat channel instead of playing the game (This has since become the recommended way to succeed at ANY online game). The origin is a reversal of the first letters on the game unit, Battle Cruiser. Since my online handle at the time was ~Squiggy~, it was not hard to convince myself to upgrade to a better one.

"If you didn't have to work (or really report to anyone other than maybe your wife), where would you live and what would you do with (to?) yourself to occupy your days?" - Doobie

I would live in a place with direct access to a beach, pool, and Internet. I would spend the first two months doing nothing but playing video games until I got sick of them and got it out of my system. After that, I would probably be just as productive as I am today, perhaps with slightly more composing and slightly less coding. I might even get around to finishing my replacement for MacGamut and Practica Musica.

"When will Mike (of Mike and Chompy) update his website again with tales of adventure?" - Evil Mike

Mike is so busy failing his students or dating his coworkers (both of which are allowed -- it's the reverse that is frowned upon) that he'll probably never update redzeppelin.org ever again. He would probably have to clone himself, but that can't happen anytime soon since he doesn't understand how the body works at a cellular level.

"If you undergo gene therapy how many genes do you have to change in order to get the end result? All of them? One of them? I honestly do not understand how this works." - Chompy (the dog)

Unfortunately, we're out of time today, but this question will be given its own Day sometime next week, on a very special update of the URI! Zone.