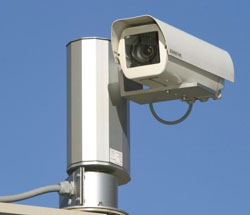 ♠ I recently read an article in the Post about the pervasiveness of red light cameras around the region. Personally, I don't have any problems with properly calibrated red light cameras, because people who run the light long after it has changed are pretty douchey by their nature.

♠ Of more pressing concern in my book are speed cameras. Speeding is a very green offense, because it reduces the number of cars on the road at any given time, increases productivity while decreasing travel time, and breaks up those viscious slow-moving pockets of drivers that threaten the throughput of roads. Plus, when you have a speed camera, you eliminate the enjoyable car game, "Spot the Cop", which I became a master at after five years of driving on I-81 to Blacksburg.

♠ Road Tip of the Day: That traffic light may turn red if you're speeding, but if you speed even faster, you can still make it through before it changes. However, this doesn't work on those curmudgeonly-red lights that treat green as a leap year holiday, like the one on my way to work.

♠ I've been a little less busy with work this week, as you can see by the fact that I only had to fall back on EZ updates (also known as Scrabble Day) once this week. And that update was originally going to be more ambitious, but our third game of Scrabble extended overnight, and when we returned to play the next day, Booty had knocked over all of the letters in a quixotic attempt to learn English. Maybe I'll teach her to understand more words than her name and "DINNER TIME FOR KITTIES" this summer.

♠ Speaking of pet projects, DDMSence has now had 380 legitimate downloads, which is like one download for every day of a leap year, and then one bonus download for each of the Holy Helpers. Had I monetized this library from the start with micropayments, I would probably have earned enough money for a gallon of gas or so, but then I would have had to report it on my tax forms.

♠ Sunday is going to be Tax Day in our household -- don't forget to mail me your $50 so you are in compliance with the URI code. Now that things are quieting down with work, maybe I'll even get to play some video games this weekend. The rest of the weekend will be punctuated by various dinners with various diners.