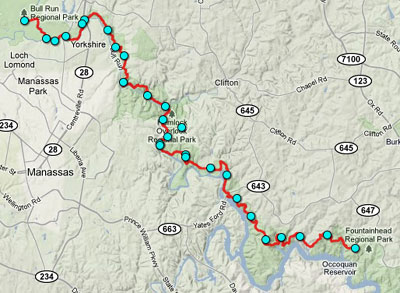 I would normally exploit the socialist secular sabbath that is a Federal Holiday as a prime excuse not to post an update, but the posts from Wednesday through Friday of last week are embarrassingly impervious to literary appreciation. In recompense, you get this bonus update. Smashing!

This weekend was marked by a lot of highs and lows, but from a perspective that is more geospatial and less emo. We hiked the Occoquan Trail between Fountainhead and Bull Run, which totals up to about 19 miles if you include all of the scampering around looking for unlocked bathrooms. As someone who is no longer in the 2nd quartile of youth, I played my "old" card and stopped at the 11 mile mark (and thankfully, my big toenails did not turn black and fall off), but Rebecca, Emily, and Other Brian made it all the way to the end. 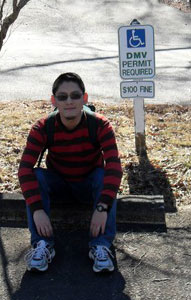 After a brief nap and a foot-soaking, I met back up with them in Fairfax for some well-deserved pizza and Kona beers, specifically the one we had on our honeymoon. The others were walking rather crookedly after those last 7 miles, which leads me to believe that they had to ride some bulls in or around the Run.

On Sunday, we met up with Rebecca's coworker, Ashley, in Reston for some sushi at Obi Sushi. The restaurant was trendy and mid-range on prices, and the sushi we tried was good, but like wines, our connoisseurship for sushi falls discretely into "awful", "good", and "great", so this might not be saying much. In the afternoon, Rebecca made a batch of chocolate chip cookies, while I battled some malware that somehow ended up on my Vista laptop during an automatic Windows Update at 3 in the morning.

We closed the evening by starting the third Pirates of the Caribbean movie, and we're almost through the opening credits now!