♠ While driving through Seven Corners on the way home from DISA on Wednesday, I realized how much of my childhood geography was defined by the locations of game stores. My preteen topography was bound by the Software Etc at Seven Corners Mall (where we bought Zork I), the Babbages at Springfield Mall, the Egghead Software on Route 7, and the Lionel Kiddie City on Little River Turnpike. If there was a chance to earnestly scan a game until my parents got the hint and bought it, I probably knew the way to get there, even at age 9.

♠ The other night, I was in the local Gamestop in search of an alternative to the many hours I waste playing Minecraft, and narrowed down the choice to a DS RPG and the new Donkey Kong game for the Wii. The decision at that point came surprisingly easy when I realized that I no longer have the patience to turn on the Wii, switch all the TV settings, and sit through four hours of company logos and warnings to hold on to the controller tightly. It's a huge production any time I play the Wii, and I'm surprised more people don't get fat during all of the LOADING screens in Wii Fit.

♠ I left the store with Dragon Quest XI, a choice which was evangelized by the girl working the register who apparently spent her entire summer vacation playing the game and wanted to tell me all about her pink-robed mage guy. It's a smart business move hiring the only girl gamer in Sterling to work in your game store. 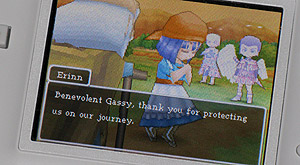 ♠ As has been the tradition ever since I lived with Anna and played Zelda: Wind Waker, my hero's name is Gassy, and he's supported by a party consisting of Bloaty, Stuffy, and Crampy. For some reason, Farty and Poopy were deemed unacceptable character names by the Nintendo corporation.

♠ It's a little known fact, but in L. Frank Baum's original manuscript, Dorothy passes out due to the overwhelming scent of a poopy field -- as king of the jungle, the Cowardly Lion did not have to bury his. Unfortunately, this did not go over well with Hollywood movie censors of the era.

♠ This fragments column is probably highly uninteresting to anyone who doesn't play video games or poop, so here is a picture of my nephew for the other demographic. 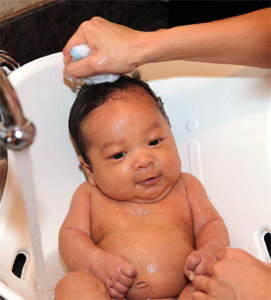 ♠ Plans for the weekend include a 90s Party (the first decades party I've ever gone to that ISN'T the 80s) and using my lack of a cable subscription as an excuse for not watching the Virginia Tech / FSU football game on Saturday afternoon. What are you up to?

Teens lost in Pacific looking for vodka, not love