BU in the days before blogs

Fifteen years ago, on November 30, 1995, I was a senior at T.C. Williams High School. I had a Calculus exam in Mr. Kokonis' class during 5th period which was interrupted by a fire drill, but otherwise the day was rather dull. After school, I was playing around in a very early edition of Finale (before they started versioning them with years and trying to convince me that music notation in 2007 was radically different from music notation in 2006 and worth $150) and wrote the first bars of what would eventually become the jazz band chart, Neckbone. This chart was performed at least four times, putting it ahead of most of the fare found in an Undergraduate Composers' Forum. 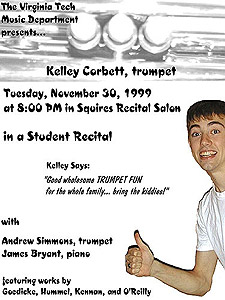 Eleven years ago, on November 30, 1999, I had my usual Shultz dining hall lunch of macaroni and cheese, pizza, nachos and cheese, with a side of bacon and a glass of lemonade while mostly enjoying the company of Liz, Doobie, Kelley, Shac, and Jason Chrisley. It was my fourth year at Virginia Tech, which meant it was time for the first of Kelley's innumerable recitals -- I was responsible for the poop-quality recital poster as well as page-turning for the accompanist. After the recital, we all went to Philip's -- he was blessed with our company quite frequently, being the only friend who had an off-campus townhouse within walking distance.

Nine years ago, on November 30, 2001, I was in my first year of grad school at Florida State (pre-Booty). In the morning, I gave my presentation on Hauptmann's Conception of Rhythm and Meter to a forcefully enthralled History of Music Theory classroom. The gist of Hauptmann's work was simple: A perfect fifth "sort of" cuts an octave in half, and a perfect fith can "sort of" be cut in half by a major third, so hundreds of pages of musical numerology facts can kind of be derived from these rigid rules in a mostly mathematical manner (as long as you are comfortable assuming that 3 is a happy number and 2 is the numeric equivalent to "sad"). After lunch, a critical mass of composers ended up in the ampitheatre where we usually congregated (probably because it was too nice a day to be inside pretending to compose, which is what composers usually do), and someone had the bright idea of taking the new composition professor, Dr. Wingate, out for happy hour. I tagged along, thinking it would a good way to broaden my composer horizons and learn a few things, but it ultimately turned into complaining hour about the music theory department, not unlike any given night at Mike's apartment.