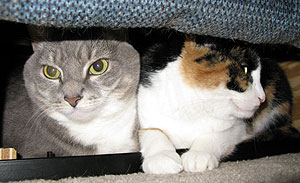 We did not get a chance to set up the fake Christmas tree this weekend, although our experiments in the lab did lead to the creation of a two-headed cat. This feline chimera occurs when you invite scary people over and then block all of the hiding places under the couch with pillows except for one. We also started watching the second season of Dollhouse, which led to interesting philosophical discussions about what would happen if you imprinted a human personality into a kitty.

On Saturday night, we went to the new Japanese restaurant in Herndon, Nippon Japanese Restaurant, whose only claim to fame so far is existing "behind the McDonald's". Our meal of soups, sakes, sushi, and sesame ice cream was delicious, and well worth the price -- this may end up becoming our go-to place for sushi (besides the cost-effective mass-produced packs at Costco). Also, unlike the neighbourhood Omia's and a hole-in-the-wall Peruvian place we went last week, there were actually other people eating in the restaurant at the same time as us, a thrilling social achievement.

Today, I'll be busy counting up all of the votes in the Museday Tuesday poll, which shouldn't take much time at all since only two people have voted so far. This is my passive-aggressive approach to soliciting more votes, and also works in any peer pressure situation.

Clown robs woman on the pot

From Walmart to the strip club

Top 48 ads that would never be allowed today