a roller coaster of smug 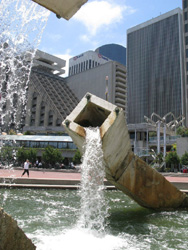 ♠ Our trip to the West Coast was good fun, in spite of the fact that the airlines are becoming stingier with each trip. We spent a few days in Spokane, Washington for a wedding, followed by three days in Berkeley and San Francisco. At the end of the Berkeley leg, we rented a Hyundai Elantra and spent four days in and around Santa Cruz. I'll probably do some sort of write-up next week.

♠ Based on my experiences with the free XM in our San Francisco rental car, I finally canceled my home account after months of wobbling back and forth. XM's musical output was roughly on par with a freshman bassoon audition right after they merged with Sirius, and it has since declined to "fifth grade orchestra concert". Apparently, music is too expensive now, so XM either plays the same 20 tunes found on normal radio, or throws up hundreds of minimum wage DJs that talk too much with nothing interesting to say to reduce the amount of music royalties being paid. Driving around Santa Cruz with nothing to listen to really drove this point home (if home were on the West Coast and featured Katy Perry's "California Gurlz" simultaneously on four channels).

♠ Without XM in the car, I'll probably fall back on CDs more often, which means that I'll have to replace the CD player that has been breathing static ever since my battery died in the parking lot of Popeyes in 2009. I'll also need to find a new source for new music, although I haven't downloaded a song I liked on XM since at least six months ago.

♠ I have no big plans for the weekend, other than to get some new shorts and jeans from Target that don't have holes in the ass (I prefer to provide such a hole myself) and to stock up on Costco goods for the first time in five weeks. I may also do some DDMSence work or work-work on Saturday as well.

"Zombies" crash on I-84 near Lloyd exit