a periodic table full of elephants 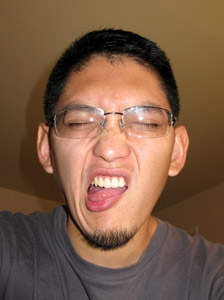 ♠ I'm almost done consuming the giant bag of Costco chicken nuggets that taste like a sponge in a carpentry workshop. I generally scarf down ten as a quick flavourless lunch and have found that they're only useful as an edible plate for barbeque sauce or ketchup.

♠ When I was in afternoon day care in elementary school, we often had snacks of celery and peanut butter. While some kids might opt to down the peanut butter, leaving a spittled celery stalk behind, I didn't really like either ingredient, and would just double up on fruit juice.

♠ I was also never a fan of peanut butter and jelly sandwiches, and eventually asserted my teenage authority by having my dad make only bologna and mayo sandwiches for the rest of my primary education career. Should peanuts ever get a world ban to protect all the allergic folk like Mike (of Mike and Chompy) who didn't roll around in the dirt enough as a kid, I wouldn't miss them a bit.

♠ Just so I can look smart in ten years, I would like to make the prediction that my future children will have no food allergies, other than being allergic to vegetables (which can be compensated for by eating more bacon). The URI! Zone should still be around in a decade, although you'll have to read it on a tablet PC embedded in your palm (which will make charging it a bitch).