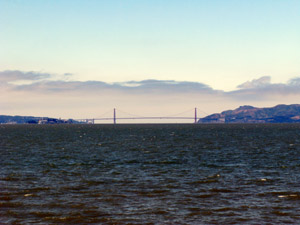 The first thing we noticed about the BART system in San Francisco is that the trains actually run on time, down to the minute listed in the scheduling pamphlets. After this temporal marvel, we learned that in transfer stations, you can actually get off a train, find your connecting train waiting for you, and simply cross the platform to hop on. After eons of walking two blocks to Gallery Plaza from the Orange Line (to prevent growing old in Metro Center), this fresh perspective on logic was thrilling.

We stayed in "suburban" Berkeley with Anna, Rebecca's aunt and consummate host, and traveled into the city to meet up with Annie and Andrea. On our first day out, we visited Chinatown, and it probably isn't racist to say that all Chinatowns look the same. This particular Chinatown had a traditional gate which was less impressive than a junior Congressman from California -- it barely spanned the road, and looked like a cast off prop from "It's a Small World".

After sampling free fortune cookies from the Fortune Cookie Factory, we walked 10 blocks to Japantown. When we stopped and realized there were another 10 blocks to go, we decided to take a bus the rest of the way, so we would be fresh when we marvelled at the giant mall filled with Hello Kitty and live koi. We didn't make it to any European-towns while on the coast, but we'll rectify that locally with a trip to Germantown as soon as possible.

On the following day, we took a driving/walking tour of Berkeley, and then when all of the chicks started shopping, I walked home to post my 12 of 12 and read in the sunshine. Although it was chilly in the evenings, the days were unseasonably warm for the season -- we were probably emanating East Coast heat from our pores, not unlike itinerant convection ovens. For dinner that evening, we met up with East-Coaster-turned-West-Coaster, Vu, and had some delicious sake and sushi in downtown Berkeley. 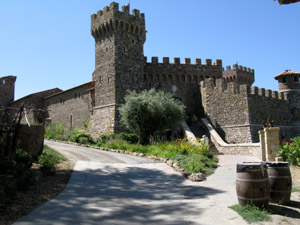 On our last day up north, we rented a car and drove up to Napa Valley for a wine tour. It took us several blocks of walking to locate the Napa city Visitor's Center, although we were informed enroute by a teenager that "that place is only worthwhile for old people like 30... no maybe 57". The retirees manning the Center were very helpful and loaded us up with maps and glossy uncompostable magazines, because when there are 450 wineries on a thirty mile road, the only way you'll get visitors is if you bribe the Visitor's Center to "highly recommend" your winery to clueless visitors.

We started with a tasting at Grgich, where they sacrifice their vowels for high quality grapes, and then had a bottle of Grgich zinfandel with burgers at a roadside stand. From there we hit a winery inside of a $41 million castle, followed by the Sterling Vineyards which was separated from the road by a 200 yard sky-car trip. This winery was near the top of the valley, and with the temperature hovering up near 100 degrees, it quickly drained us of the urge to visit any others. We returned to Napa for some highly-yuppy organic ice cream and free samples at the olive oil / chocolate sauce stands.

Beer to be sold in dead animals

Professor foiled while on vacation