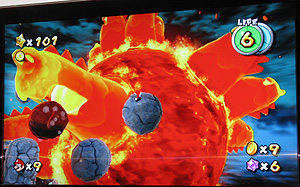 Mario Galaxy 2 is a great game which really feels like a massive expansion pack to the original, rather than anything new or innovative. If you liked the first game at all, this game is more in the same vein, and you'll like it just as much. As I write this review, I'm 110 stars in, and on the secret levels after the (unexpectedly boring) final boss fight.

There's very little new graphically, and the gameplay is familiar -- deepened from the first game but not broadened. All 3D console games suffer from horribly implemented cameras, but the "planet gravity" style of this series tends to minimize the innumerable deaths you might blame on the camera. Difficulty walks the line between annoying and frustrating very well, and while levels scale up in difficulty fairly quickly, nothing is overly challenging until the last world. The music is the best part, a perfect mix of fully orchestrated tunes and classics, and the sound is passably good besides the standard annoying Mario whoops on each jump.

With so much care and polish put into the great parts, it's really disappointing that they've not taken the time to improve the classically bad aspects, most of them UI-based. 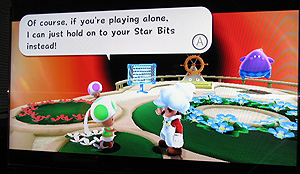 Unskippable Custcenes: While it's true that you can skip certain sequences after you've seen them once, the pace of the game between actual playtime is horribly slow. Each level is accompanied by several seconds of Mario flying through space, or being forced to wander around the ridiculous Mario-shaped spaceship that flies between worlds -- evidently they failed to recognize that the hub was the worst part of Mario Galaxy, and included it PLUS a world map for twice the load times. Now, you return to the hub after each level, wade through four status messages, and then travel from the hub to the world map to go to the next level.

Conversationally, everyone has tons of useless information to provide, and it appears on the screen letter-by-letter unless you constantly hold a button down. If I see someone who says "I'm a Banktoad!", I'm going to assume that it's a Toad who does some sort of banking and intuitively figure out the rest -- I don't need four bubbles of text on how to deposit my Star Bits. 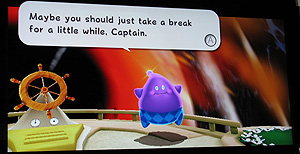 I am not 12: Nintendo continues to color in random words and phrases in dialogue, as if gamers are incapable of understanding basic English sentences. Every time Captain Blobbo on the spaceship called Princess Peach "your special one", it felt like he was politely hinting that she may be retarded (and she would have to be to keep getting kidnapped by Bowser). Also, every time you run out of lives (another useless holdover from ancient Mario games), Captain Blobbo tries to calm you down by suggesting that you take a break for a while. DON'T TELL ME TO CALM DOWN.

The Wii is not a Precision Gaming Console: Don't make a platformer that requires precision spins, and then bind that action to A HAND SPASM. Give me a button (and a wired controller) so I don't spin off the world when I have to scratch my nose. Also, when you include a timed minigame where you have to stomp on 100 enemies, then place those enemies in a poorly differentiated 3D plane where you can't tell if you're going to land on top of them or in front of them, let me change the camera to be higher up!

Lava Blows: It always has, but ever since Mario 64, lava has caused Mario to bounce around the screen in a nearly uncontrollable scatter drill. Being able to take three hits is irrelevant when your first contact with lava is likely to drop you back in the lava two more times. This game actually makes me hate lava more than I hate ice.

Final Grade: A-, in spite of the annoyances

Woman jailed for using 911 as a date line