♠ At work, we've just wrapped up work on a short-fuse prototype named EADS, which is a better acronym than the original ADS for multiple reasons: a) URLs with /ads/ tend to get blocked by Ad Blockers, b) writing ENTERPRISE on anything makes it seem much grander (try it on body parts), c) when Scottish people talk about the site, it will sound like they're talking about AIDS, and d) there will be so much room for naming future functionality like POOPHEADS (Planning and Operations-Oriented Projected History). 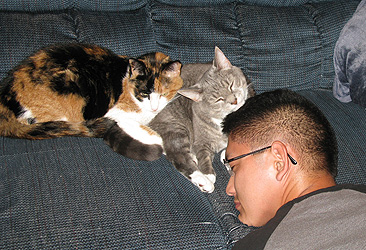 ♠ I've kept pretty busy for the past two weeks, so I'll probably take the afternoon off and nap on the couch with cats before diving into the weekend. See Figure A on the right for a dramatic reenactment of my plan.

♠ I didn't have an End-of-the-Month Media Day last month because uploading pictures takes far too long and I never got around to coding a Spring-based Photo Gallery for this site (at the time, I wrote the BUVite web application instead). I'll probably take the easy way out next month and dump all my new pictures since Halloween onto Picasa.

♠ I used to hate Picasa because you couldn't open up multiple pictures in new tabs by middle-clicking them. Since they added that enhancement, there's really nothing left to hate, other than the fact that "picasaweb" is an awkward word to type because of the left-handed traffic jam that occurs as the word nears completion. To be truly successful, sites should have evenly distributed titles like "urizone" or "swastikajuju".

Cody the BP dog sent to the back room

Laptop holders for your steering wheel are a great idea

What do cats do home alone?