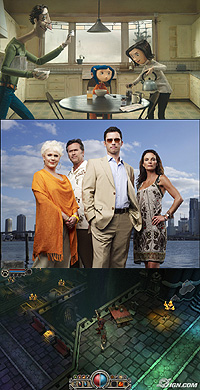 Coraline:
Written in the vein of Nightmare Before Christmas, this stop-motion movie is highly imaginative, and has even more unsettling imagery (and a more cohesive plot) than the previous movie. This is definitely not one for kids, unless you want them to have nightmares.

Burn Notice - Season Two:
The second season of Burn Notice continues the template set up by the first, with a little more emphasis on the ongoing plot rather than the "case of the day". This was still an enjoyable watch, but lost some of the novelty of the first season. There was never any major urge to get through this season, but we'll definitely get the third season.

Torchlight:
Torchlight is a $20 Diablo-clone made by the original developers behind Diablo, and it's definitely worth that price. Decent graphics, immersive backgound music and a minimum of annoyances make this a worthwhile buy. The main negatives include a loot system that makes it hard to click on specific items, a very dim minimap (fixable by a mod), and an enchanting system that sometimes destroys your items. Just like Diablo, this is an addictive, enjoyable game that eventually just stops being fun, at which point you move on to the next game.