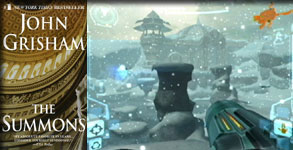 I never post anything particularly thought-provoking on weekends, so I thought I'd continue the trend and throw up some more reviews. I read The Summons by John Grisham over Christmas break. John Grisham only writes potboilers these days, but he's like the McDonald's of the literary world: a good choice when you know exactly what you want and how it should taste, even if it's not the best food ever. The Summons is a good page-turner that actually strays a bit from his usual "shoot-and/or-chase-the-lawyer" plots. It keeps you involved although it won't take more than one day tops to get to the end. Unlike The Partner, the threads of the plot are actually resolved in an agreeable way by the end and the plot twist is cute if not particularly surprising. Buy it for a light, enjoyable time waster and you won't go wrong.

I finally beat Metroid Prime for the GameCube on Thursday. It's one of those rare games that does everything right, and is easily the best game, computer or console, I've played in a long time. I played the original Metroid for the NES long ago but never actually owned it, so I didn't really have any grandiose expectations going in. However, the game catches your attention early on and immerses you in the world regardless of whether you've played any prequels. From the beginning there's a constant wow factor, and the little touches (like swarms of vermin pouring out of ventilation ducts as a spaceship's explosion is imminent) show that a lot of time was put into this game. Black & White also had a wow factor, but this game differs because that special quality never wears off! The game is continuously mixing it up with new areas and new equipment. Control is incredibly receptive although it's sometimes hard to turn around quickly in battle. This is more a problem of console shooters in general -- if this were a computer game, the mouse would fix that problem immediately. The game is challenging and offers an easy 20+ hours of gameplay, especially if you go after all the optional goals. The only time I ever got frustated was in the penultimate room which was more obnoxious than challenging.

Metroid Prime is definitely the "killer app" that justifies the purchase of a GameCube. In fact, if you buy a GameCube now, you can get it for free. Bastards.

Fun Fact: The term describing when dogs scratch their butts by dragging them across the floor is "sleigh riding".