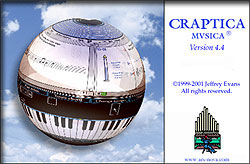 Practica Musica is easily the most poorly-designed software I've ever used. In general, it seems that software designed by or for musicians tends to be unintuitive or slipshod (consider early versions of Finale), but here it's especially unacceptable since the program is billed as educational software. PM's interface actually interferes with the learning process and more often than not it prevents students from translating what they want to answer into an expected canned response. Even on the instructors' end, the class report scheme (coupled with a Quit menu option than seems to mean different things at different times) makes more work than it should.

We used MacGamut when I was an undergrad, and while it may not be as customizable as PM, I'd recommend it any day over this tripe. I'm almost inspired enough to add "write ear training software" to my long list of future activities. If you're ever a full professor somewhere, check back on that idea -- maybe I'll give you a discount if I like you.

I've never understood why programmers don't apply the same simple strictures of human-computer interaction that are used with normal software. Consider, for example, Finale's shape editing tool. If you want to crescendo a particular amount, you have to create a graphical shape that matches the contour of the crescendo magnitude and then fit it to the occasion by inputting a numeric ratio for time scale and level scale. Finally you have to match that shape to the MIDI controller responsible for Volume (that's controller 7, geek-y). Wouldn't it have been more intuitive to have a dialog box which said "Crescendo from 50 (pp) to 120 (ff) steadily over 8 beats"? Then you could have drop-down boxes to change the underlined parts.

Then you have the cases of software that gets away with being buggy simply because it's the only game in town. Back in my drill-writing phase, the de facto drill software was Pyware and then Pyware 3D. I worked with that software over the course of three versions, and every one of them would fatally crash if you moved a particular rank formation across a yard line in a certain way. The company (which was probably one guy) kept putting out new versions for hundreds of dollars (the current price is $600 I believe) but this one little bug never got fixed. This revealed that the programmer probably based all his future enhancements on some shoddy baseline and didn't want to stop cashing his royalty checks to ensure its soundness.

Tallahassee Winds put on a good concert last night. I enjoy listening to wind bands -- it carries me back to old Virginny and all the ensembles I used to play in.

Soon I will never have to drive to FL again