This week in my PRIMA work, I completed the algorithms to allow the computer to recognize all regular pitch orders (modes and scales where the spelling going up is the same as the spelling going down). It can also take a MIDI note number or pitch name and translate it into the appropriate enharmonic, based on the current key signature. I'd post the demo applet I wrote, but so much of the work is under the hood that you probably wouldn't be too impressed by it.

Warcraft III comes out on July 3rd, and the advance hype seems to be overwhelmingly positive. I've got a copy ordered for when I finish off Jedi Knight II, which I've been playing these past few weeks. The first few levels are incredibly underwhelming and tedious, but once you get the lightsaber and can start throwing people around with the Force the fun level goes way up. I've never been a big fan of the Star Wars mythos, and the story is as hackneyed as one of the movies, but the game is still solid.

I put up a gigantic batch of wedding and cat pictures yesterday evening, so feel free to take a look. There are also two new short clips for your pleasure de viewing.

Kudu could become a star

Pumping at the bench is not kosher

Guys' night out to Vote

Because the license wasn't already run into the ground upon inception

With their new album, X & Y, Coldplay has chosen to stick with what works rather than be adventuresome, and for the most part, it succeeds. The CD has twelve tracks and a hidden one dedicated to their hero, Johnny Cash. To me, Coldplay has always been about the sound first, and then the lyrics second. They excel at creating a mood using just a wash of sound (a technique that most people who dislike their music find boring and repetitive) and use Chris Martin's vocals as a solid hook. A few of the songs on this CD have already started appearing on the radio, like Speed of Sound and Fix Me. Almost all of them are very strong alone, but they don't necessarily function well as an album. Because they all exist on a thick foam pad of harmonies, they tend to detract from the memorability of any one song when you listen to the whole album at once. However, there are no songs which I hate, and all of them have grown on me over the past couple weeks. If you liked any individual song from their previous two albums, I'd recommend getting this album (as noted a couple days ago, their old song, Shiver, easily ranks as one of my favourite contemporary songs). Apparently not all of you readers will, since I currently have two votes for "You have horrible taste in music" in my weekly poll.

Last weekend while stuck on I-95 South, I had the chance to listen to an exclusive XM interview of Coldplay on their "Artist Confidential" series and found the group to be surprisingly urbane and witty for a rock group. In the one-hour interview, the band talked about how they formed, the significance of the new album title, and why they don't take the U2-approach to writing about world issues. Scattered throughout the Q&A, they played acoustic versions of Clocks, Kingdom Come, and another song from Rush of Blood to the Head which I can't recall. To my pleasant surprise, they're as strong live as they are recorded, with Chris Martin effortlessly hitting notes on pitch (unlike Tom Chaplin of Keane).

Now if only they could keep Chris Martin from looking like an epileptic muppet when he's playing the keyboard on camera, they'd be all set to take over the world.

I was minding my own business yesterday afternoon when it suddenly occurred to me that one of my cats bears an uncanny resemblance to a map of the United States. Apparently Amber is fiercely patriotic. I quickly rushed to get my camera so you could have photographic proof of this strange phenomenon. Her legs are obviously Baja California and Florida, respectively. If you are having trouble seeing the similarities, then take a look at the overlay below. It's clear as day! 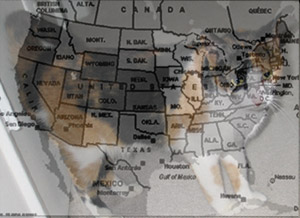 To capitalize on my discovery (just in time for the Fourth of July), I now have a line of T-Shirts available. Show your patriotism by buying one today! 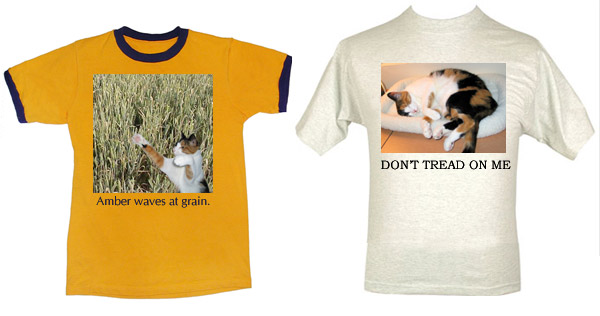 You know it's hard out heah foa pimp

it's the end of the month as we know it 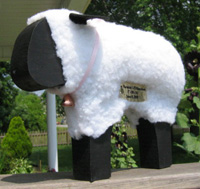 ♣ I finally got around to posting all of the pictures I've taken this month but we're tragically short on days to devote to another Media Day. Instead you can pick your poison here:

♣ Some of these breathtaking photos have never before been seen by human eyes, like the photos from Rebecca's birthday last week, where we went to the Sequoia in D.C. (the cheap outdoor part) and bumped into Jack and his groomsmen partying late into the night. They were still there when we left around 1:30 AM, but Jack was alert and chipper the next day. That's one of the skills they teach you at Princeton.

♣ Speaking of birthdays, today is Kathy Biddick Smith's Sweet Sixteen1. Happy Birthday! Kathy and her husband also tied for first place in the "Which married couple would win in a fight?" poll. The most important question to take away from that poll is: "Why the hell do I know so many married couples?"

1: Times Two Minus One 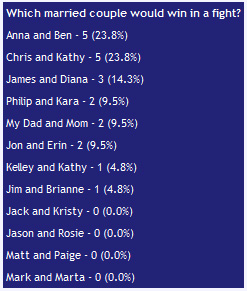 ♣ Since Kathy and Chris tied in first place with Anna and Ben, there's nothing left to do but have the face-off and place bets on the outcome. Here's how I envision it will turn out: Ben and Chris start talking about World of Warcraft and get completely sidetracked. Meanwhile, Anna will exploit her baby for the cute factor to distract Kathy and win by a hair.

♣ However, this could get reversed if Kathy wins the drawing for the $5 gift certificate and uses it to buy a book of fighting techniques. How would she get entered in this drawing? By filling out my 2007 Census before tomorrow!

If you haven't done it yet, do it today!

♣ It's interesting to see the distinct layers of visitors from various phases of this site's life, from the fossilized core of 1996 visitors through varying shades of visitor sediment as I moved to Florida and back, to this year's brand new faces. I actually heard from an old friend this week, Andrea from Canada, who was a visitor in 1997, and also a member of the now-defunct URI! Fan Club which had three whole newsletters. I knew her back in the days when text messaging meant you had ICQ installed and chat rooms were not full of FBI agents pretending to be eleven years old.

♣ Fun text messaging fact of the day: If you happen to spot me wandering down the street and quickly send a text message to a friend describing what a hottie that Brian character is, and you have one of those phones that tries to guess what you're typing based on the keypad letters, your phone will presume you are trying to type ASIAN instead of BRIAN. I have already petitioned the Roget's people to make this a permanent synonym.

♣ This weekend kicks off the summer with all the style of an octogenarian dressed completely in Kmart clearance items. Tonight, we'll be going to Wolf Trap to see Bill Cosby perform and to eat Jello snacks. Tomorrow, we're heading down to Colonial Beach for the Spellerberg's annual Fourth of July Weekend family gathering (since, in the absence of Vu, I am the token adopted Asian brother). Tomorrow is also Matt McGuire's birthday -- happy birthday!

The British Invasion... of rubber duckies

The entry should have read that the license plate had been stolen if it was on any vehicle that isn't a giant hot dog.

Muggers leave behind their own pictures 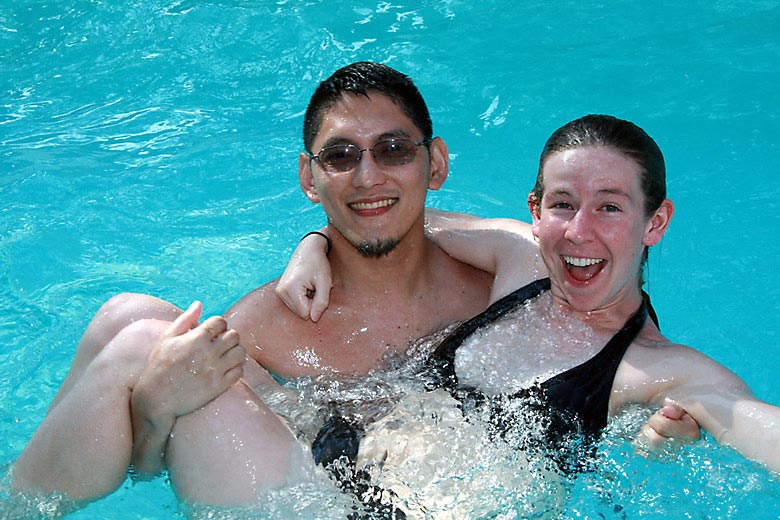 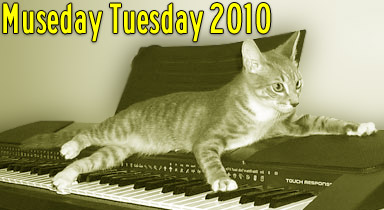 As part of this feature, which I started in 2007, I compose a very brief work (under 30 seconds) inspired by a randomly generated title from an online word generator. The composition can be for any instrumentation, and could even be a purely synthesized realization that might not be possible to perform in the real world.

I work on the excerpt continuously for an hour and then post whatever I've managed to complete, even if it's a poorly constructed slum of a song supported by a foundation of droning double stops and abused tubas.


This excerpt is written for miscellaneous patches, including the jazz scat samples that tend to turn out more creepy than jazzy when I apply them in my music. 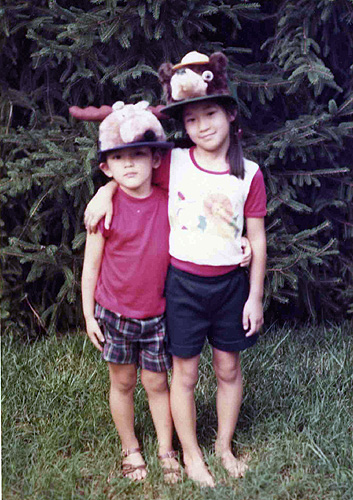 It seems like there are a statistically significant number of pictures from my youth taken in front of this pine tree -- it probably has something to do with the need for a regular background texture and color in my dad's darkroom days when he developed all of his own pictures.

I always felt that the moose hat was far cooler than the Smokey the Bear hat, even though the moose was anonymous and lacking celebrity. Plus, Smokey had a hard-shelled hat, while Anon the Moose was soft all over.

New pictures have been added to the Life, 2012 photo album. As the number of interesting activities we attend declines, the number of cat pictures increases proportionally.

This post means that the month is over, which tells us (by induction, or possibly convection) that 2012 is now halfway through. Is that depressing or amazing?

P.S. If you squint at the picture above, Booty looks like an Ichthyosaurus. 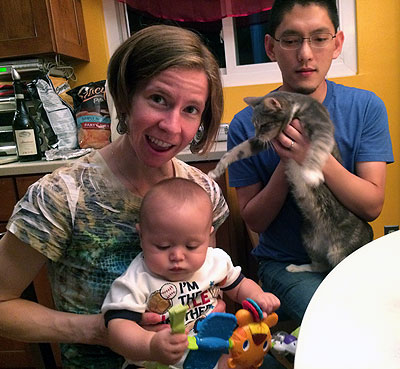 Amidst the usual weekend shenanigans of Rebecca hiking the AT and me working on a proposal, we had a rare Poker Night to celebrate Anna and Ben being in town briefly.

After dinner at Mellow Mushroom (where the food was delicious as usual although our waiter had a sweaty, manic thing going on), we had a poker game with Larry, Returned Mike, and Annie, while Sydney the cat got reacquainted with the youngest Ahlbin (the rest were off at grandma's house).

Mike ultimately won the game, followed by Ben, and then Larry. Everyone else was out pretty quickly and spent the rest of the evening eating birthday cake and chocolate eclairs. 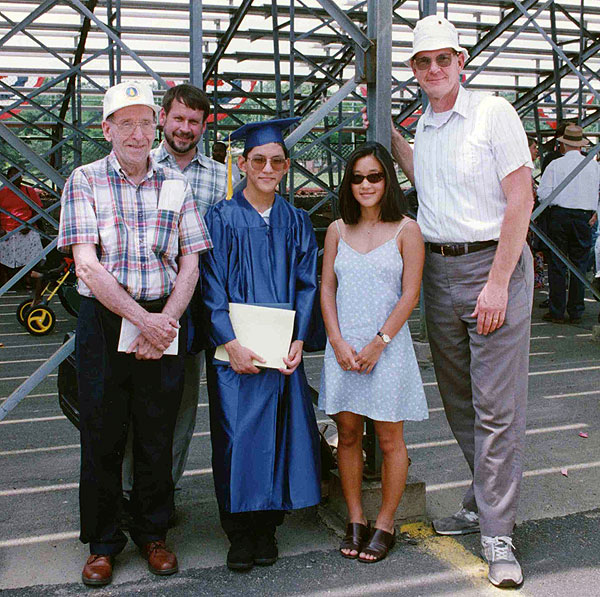 My grandfather and uncle were in town to celebrate my high school graduation, and my mom forced my dad from behind the camera for this single shot. The day was ridiculously hot, and I had an illegal contraband fanny pack under the robe containing a bottle of water, two rolls of Spree, and a deck of playing cards. 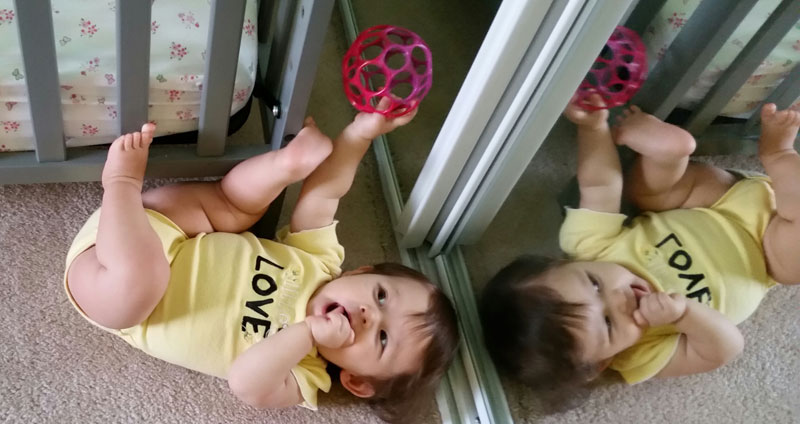 June's Final Grade: B+, no peaks or summits, but a nice rhythm with lots of fun daily activities. 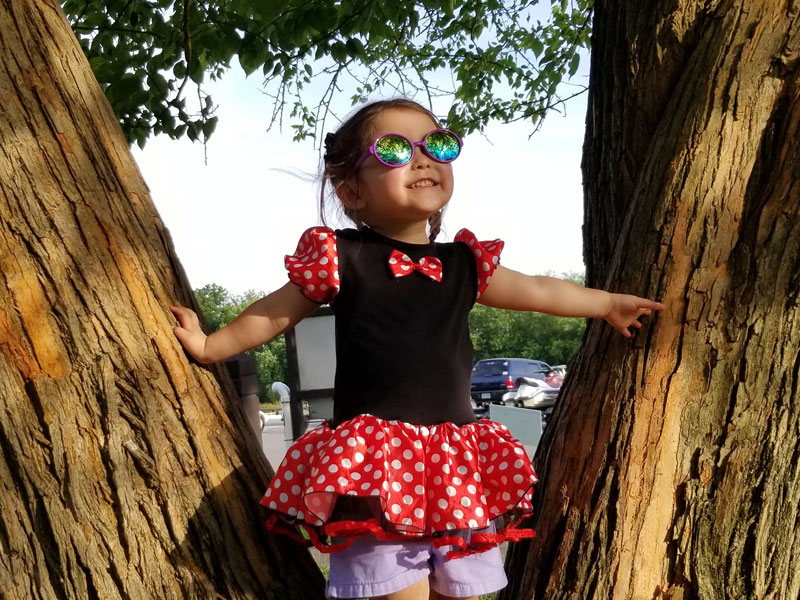 June's Final Grade: B, as good as it could have been 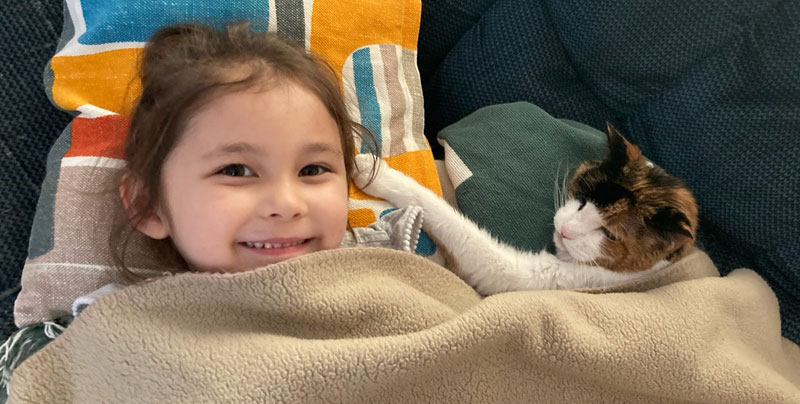