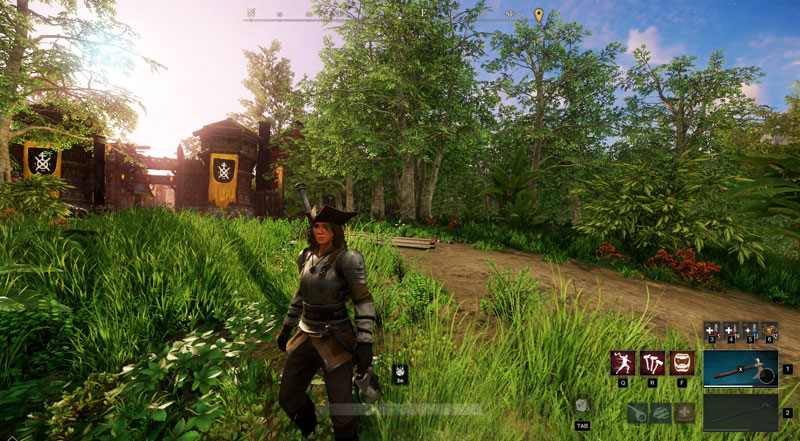 New World, the ambitious new MMO from Amazon Game Studios is a happy mess, getting just as much right as it gets wrong.

There are no classes or dead ends in character development. Every character can practice and improve every skill, and each build is designed around picking two types of weapon and swapping between them. You can only have two characters, which gives incentive to really grow attached to your character and explore lots of different builds and professions.

In contrast to World of Warcraft, which has become so simplified and streamlined that you can level up by turning on your computer, New World moves at a more stately pace. Servers are capped at 2000 players and with the decision to have no mounts, you spend a lot of time running around and actually seeing other people playing around you.

The cycle of running, gathering, fighting, and returning to town works very well. You can get into a Zen state of chopping down trees, finding beehives, or searching for chests without much effort -- perfect for winding down at the end of the day while getting distracted by something on your other monitor.

The graphics and sound quality are phenomenal. Everything about the graphical style is great to look at and the spatial audio sound of your pickaxe bouncing off an iron node in the woods compared to a canyon really sells the experience.

Combat is clunky. Queuing up actions sometimes works and sometimes fails. It's impossible to fluidly change weapons especially when monsters are making your character stagger all over the place.

The story is nonexistent, which is fine. However, the questing is absolutely awful. Quests boil down to "loot X chests" or "kill Y monsters" -- it's like playing Skyrim or Fallout 4 but only doing the "Radiant" quests. You often get sent to do a quest far away only to get back to town and find that the follow-up quest takes you back to the same area. Sometimes you have have to open 5 chests and there are only 5 chests in the entire zone, so you waste your life fighting respawning monsters while searching for the 1 chest you missed (only to find it graphically glitched under a floor).

All of the major areas on the map are copy-pasted -- once you've seen one town, the next town will be the same but rotated 10 degrees. This makes questing even worse because you don't even get to see any new scenery.

Player vs. Player combat is gate-kept to level 50 and above, so there is no easy way to learn as you play, and no easy way to influence which towns your factions have control over. In my case, I was having a great time running around while my home town was controlled by my own faction. After a power shift, we lost two towns and all the related bonuses. Travel costs, market costs, and everything else skyrocketed and fun plummeted.

All in all, I got 57 hours of enjoyment out of this game which meets my needs (I only reached level 34). The game is $40 without a subscription fee and has a lot of potential. However, it was clearly released way too early and will likely struggle to correct all of its shortcomings before a critical mass of people have moved on to something else. I hope it does, though! I might revisit again in a year's time, but it's not worth my time to play in its current state.