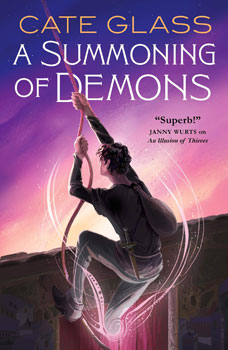 A Conjuring of Assassins is the second book in the Chimera series by Carol Berg, writing under the pen name, Cate Glass. (I also reviewed Book One, An Illusion of Thieves last year). The author delivers a satisfying, self-contained story that can be appreciated on its own, but doesn't push the overall series forward in a significant way.

A Summoning of Demons is the final book in the Chimera trilogy by Carol Berg, writing under the pen name, Cate Glass. (I also reviewed An Illusion of Thieves and A Conjuring of Assassions). I enjoyed every aspect of this book (the pacing, the plot, the author's slyly humorous writing style, and character relationships) except for the fact that it seems to bring the series to a premature conclusion.

The plot kicks off immediately into overdrive, with the Chimera team hired to investigate an unusual marriage contract. The author adds a layer of complexity to the "heist" feeling with the introduction of Donato and Livia, two wonderfully-written supporting characters that constantly force the Chimera team to reassess their biases and plans. The level of danger feels much higher than in previous books as the team's tactics don't always succeed this time around.

The world-building continues to impress, with the Italian Renaissance vibe of Cantagna so well-realized that it's almost an extra character in the story. There are also plenty of answers to lingering lore questions from previous books. This is why I was so greatly disappointed when I reached the final page -- the book's plot is self-contained and wrapped up neatly but I'm left with a huge investment in a world whose greater themes (the evil of sorcery, sorcery versus nature, and the truth behind religion and mythology) are left without enough closure to satisfy me. While there's a lot to be said for leaving the audience wanting more instead of running an idea into the ground, I was nowhere near ready for the story to conclude.

Still, I shouldn't review what ISN'T there -- Perhaps there are reasons outside of the author's control for stopping after three books or maybe her intent was always to conclude by emphasizing the intimate, close-knit bonds of the Chimera team over a grand good versus evil extravaganza. I loved reading this entire trilogy (and many other works by the author) and recommend it completely, even if I'm disappointed that Book Three is the End!