22 years ago today was Thursday, May 2, 1996. It was an incredibly long day, starting at 4:30 AM when I woke up to drive to morning crew practice -- as the important races got closer, our super-competitive coaches would practice both before and after school to maximize the time spent on the water. In this case, morning practice was a bust because a rower named Ernesto decided he was sick and didn't show up. When situations like this occurred, all of the other rowers had to use the indoor rowing machines while I sat in the window of the boathouse watching the tide come in.

The school day was pretty lackadaisical, at the tail end where AP tests are coming up but all of the seniors have already gotten into colleges. At least two of my classes that day featured movie showings.

In the evening was the opening night of the TC Williams production of Fiddler on the Roof. I was in the pit playing first trumpet and we had actual rental pit scores instead of dumbed down high school arrangements, covered in years of nearly erased cryptic markings like "play this down a minor third because the singer can't go that high". We somehow managed to pull it all off with a hodge podge batch of high school musicians and a drama club where most of the members were not singers. (We did carry on the tradition, started with the Broadway Cast Recording, of giving the song "Now I Have Everything" to one of the non-singer for maximum audience discomfort).

After a successful opening night, I went home at 11 PM to get some sleep before the entire cycle repeated the next day!

Here's a cast picture from the production. None of the pit is actually in this picture because we got tired of waiting around for the drama folks to stop doing weird drama things and left immediately after the last show. 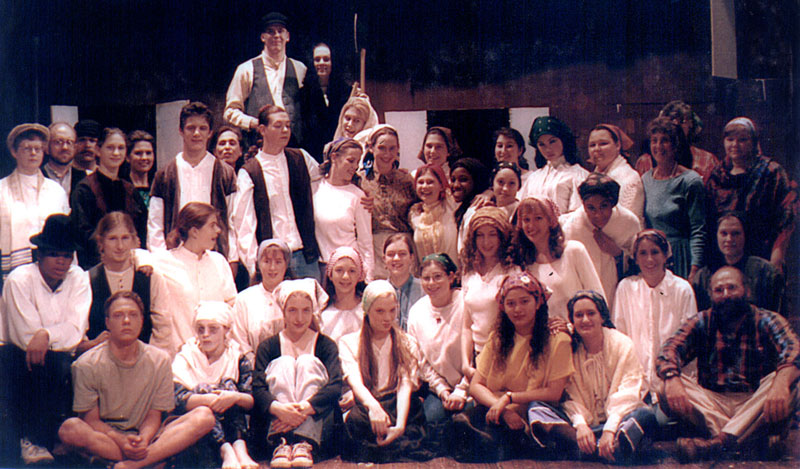