Review Day: Legenda of Zelda: Breath of the Wild 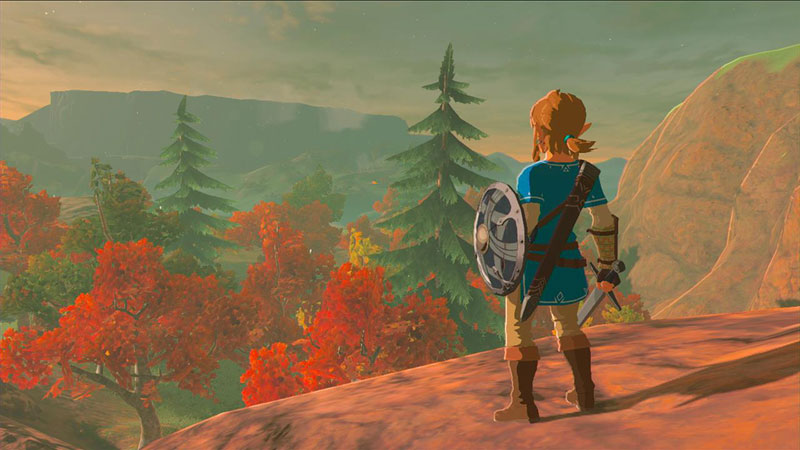 I have had a tempestuous relationship with the Zelda series over the years, and the ones I tend to like don't always match the ones that receive critical acclaim. A general rule of thumb is that I prefer the 2D games over the 3D ones, motion controls are always dumb, and the more cinematic they are, the worse games they tend to be -- I loved A Link Between Worlds on the 3DS but actually fell asleep a couple times while playing Skyward Sword on the Wii.

After about 20 hours of playtime with Breath of the Wild on the Switch, I remain unconvinced that it's a great game. It's not a bad game by any stretch of the imagination -- it's just not a game that gives me any incentive to keep on playing.

First, the good parts: The world looks great and its physics are well done. There are generally multiple ways to defeat a camp of enemies, from charging in sword swinging, to sneaking up like a Skyrim thief-archer, to waiting until nightfall and dropping a bomb on the explosives stash that is conveniently being used as pillows for the sleeping monsters. There is minimal handholding or "on rails" sections that force you to relearn the same tired lessons like "press this button to jump" or "a red rupee is worth 20 rupees!" You can also skip most cutscenes in the game, including the forgettable backstory scenes that are never worth watching as well as the interminable scenes showing your entrance into one of the 120 shrines on the map.

Breath of the Wild bills itself as an "open world" game in the vein of Skyrim or Fallout 4 but this is a little misleading. It is definitely vast, but feels pretty generic and static. After exploring every inch of the starting area (which is as big as some older games' worlds) I found nothing that would compel me to turn over every rock in future areas, whereas the tiny unique details built into the Skyrim world (like the lighthouse horror story) made me excited to veer off the main quest path at every opportunity. And no, collecting 100% of <useless Zelda collectible> is never a good enough reason.

At its heart, this game is really a cooking simulator with a hardened candy shell of Zelda themes baked around it. The game can be challenging, and cooking foods and elixirs provides temporary buffs to help you out. Unfortunately, there are so many ingredients to gather that you sometimes need to take breaks from the action to run around trees picking mushrooms or catch tiny bugs in the grass.

This leads to one of the key faults that I found with the game -- there are so many distractions from the main plot in the spirit of being "open world" and the world takes so long to travel across that I never really felt like I was making much progress. The distractions themselves are not exciting enough to make it worthwhile (conversely, I probably spent more time playing the Gwent minigame in Witcher 3 than I did on the main quest and was satisfied the whole time). Sure, there are optional puzzle shrines that feel a lot like classic Zelda dungeons, but each one is so short and lacking in character that their loading screens are often longer than the experience (look at the Tomb Raider series' "optional puzzle tomb" implementation for the right way to do things like this). Also, the optional puzzle shrines aren't so optional after all, since you must beat them to get new heart containers or increase your annoyingly low stamina.

Do you remember playing vanilla World of Warcraft and seeing a Silver Vein pop up on your minimap, forcing you to detour from your quest to mine it because it would be OCD madness to just leave it there? That's essentially my entire experience with Breath of the Wild. I'm traveling to the next quest point when my controller starts beeping to notify me of a mandatory optional puzzle shrine. While climbing up some huge mountain to search for it (the annoying beeping has a pretty massive radius so the shrine is not always easily visible) and stopping at various ledges to regain my stamina, I'll see some shiny rocks that I definitely need to blow up in case they contain important ingredients for my cooking experiments. Then I'll see an opal fly out worth several hundred rupees, but the physics engine will launch it off the mountain so I'll have to fly down to grab it.

Then, I don't have enough stamina to get back up the mountain so I'll run off to the nearest pond full of stamina fish or teleport back to the cache of stamina mushrooms in town to cook up a new batch of stamina food. I get back to the mountain but there is now a respawned enemy camp in my way and my last sword just shattered because some game developer ignored thirty years of amassed wisdom in what makes games fun by coding a weapon durability system that crushes your swords and your dreams, and makes you too cautious to ever use the fun, expensive weapons lest they break. So I whistle for my horse to go find a new weapon, but the horse is on the wrong side of the river and cannot swim. Then, Maia wakes up and I have to quit the game to change a diaper, having made zero progress towards my original goal.

Final Grade: C+, a game I would definitely continue to play when there's nothing better to do and the Overwatch servers are down.

Note: I re-reviewed this game after finally beating it but the score did not change.