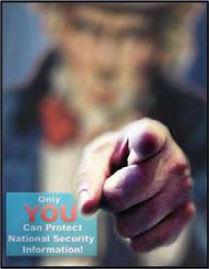 I take a yearly refresher course in information security, much like everyone else doing computer work around this area. This year, they released the course with a text supplement for people that couldn't use the website, including image captions that some poor technical writer had to invent for 508 accessibility compliance.

Why take the course when you can get the gist from reading the alt text of the briefing images?

Once you have successfully completed the training, you can also pick your favourite one and use it as a Creative Writing Prompt.