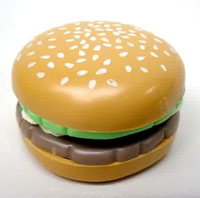 The MLK, or "Mustard Lettuce Ketchup", is a variant of the hamburger invented by entrepreneur, Chuck Wheezy, who says he gained inspiration by making different permutations with his son's plastic hamburger toy in hopes of finding a mix that would outsell the BLT. It became a regional hit selling as a vegetarian alternative to the Bacon in a BLT, although strangely, no one seemed to notice that it still contained a meat patty underneath the 3 advertised garnishes.

Wheezy's sandwich would have remained a regional oddity had the Burger King corporation not expressed interest in making a smaller version of it, selling for one dollar. Once the MLK Jr. began selling in franchises across the country, Wheezy's long-term financial well-being was ensured[citation needed].