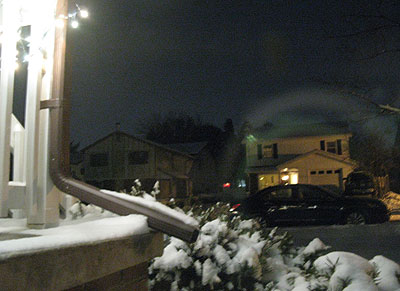 We got a pleasant couple inches of snow yesterday. I was already in the office by 5:30 before it wreaked havoc on traffic, with pictures of dive-bombing school buses and angry parents swarming the Internet. Meanwhile, Google Maps was doing its best to confuse colorblind commuters by making the "traffic stopped" and "traffic moving at the speed of light" colors super close together.

I was mostly unaffected by the snow, although I did drive 2 MPH slower on the way home than I normally would. I also had to jump-start Rebecca's car at work, since she has the first world problem of having a one mile commute that is not conducive to retaining a battery charge in cold weather. All worked out in the end, since we made it home and ate corned beef for dinner.

As snows go though, it was only so-s(n)o. For comparison's sake, we had over a foot and a half of snow nineteen years ago today, on January 7, 1996, during my senior year of high school. It snowed so much on that Sunday, that Alexandria City Public Schools preemptively closed school for the next three days, and would ultimately shut down for the entire week. Among the things I did to pass the time that week:


You are currently viewing a single post from the annals of URI! Zone history. The entire URI! Zone is © 1996 - 2023 by Brian Uri!. Please see the About page for further information.