Perfect Contradiction by Paloma Faith:
The 70s soul orchestrations on this album are very fun, but the songs as wholes are kind of forgettable. I can't listen to Mouth to Mouth without picturing the scene from Wario Ware: Smooth Moves with the disco kittens. Overall, this is better than her second album, but has nothing as catchy as Upside Down. 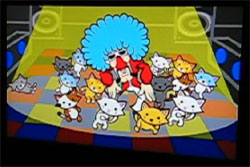 Damages, Season One:
This is a Machiavellian thriller starring Glenn Close as a power-hungry lawyer manipulating all of her associates. It employs the overused narrative device of flashing back and forth between a murder and the events leading up to that murder, but somehow manages to connect the dots in an unexpected way that made it work for me -- usually I find this approach to be the poor man's excuse for reusing film footage. The other main character, played by Rose Byrne, is an empty plot cipher that never becomes interesting, but the twists and turns of the story are strong on their own. Glenn Close is as good as you'd expect, but the surprise stand-out is Zeljko Ivanek as a tragic Southern lawyer -- he definitely deserved his Emmy for this role. Free on Amazon Prime.

Peak Organic Beer Sampler Pack:
I picked up this sampler pack on a whim at Costco last week because it was a dollar cheaper than the Sam Adams pack (plus, Sam Adams seems to be on an abbreviated year, where every season is one and a half months long, resulting in the release of Christmas beers in September).