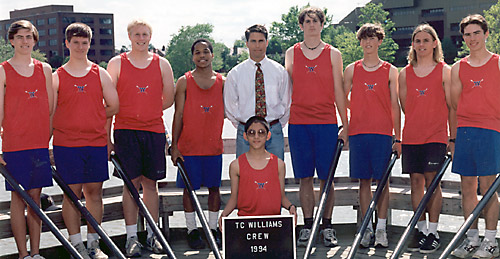 Twenty years ago today, on April 9, 1994, I was the sophomore coxswain for the Men's 3rd 8 on the crew team. The 3rd 8 rowers were not good enough to be in one of the first 16 slots. However, our crew team was so big that we also had a 4th 8 and a 5th 8, so we were spared the ignominy of being the worst boat. Only in Alexandria could you put together a crew team with 40 guys on it.

After waking up at 5:30 AM, my parents dropped me off at the high school before departing with my sister for the day to visit UVa (where my sister would be attending in the Fall). The team piled into school buses and went down to the Occoquan Reservoir, where we screwed the riggings onto our boat and went for a run. At 10:15, we finally headed out on the water for our race.

Our race went good. From lane 1 to 5 it was: Hylton, Langley, Potomac, us, Woodson. Woodson got a small head start because of the wind. The race was 1500m long. At the 500, we pulled ahead of Potomac and got into second place. We only worried about Woodson from then on. Woodson was slightly ahead of us the rest of the way down but they were scared a few times. We finished five seconds after they did. We beat Potomac by ten seconds and the other two schools by over a minute.

High from our second place win (which was about two places higher than we normally did), we were greeted at the docks by the Women's 3rd 8 in unitards. After derigging the boat, the rowers walked out to the finish line to watch other races, while I did my antisocial thing of getting back on the bus and programming calculator games. Although the races were over by 2, we didn't leave for another hour because the bus driver had decided to walk off for a smoke and no one could find her.

I made it home before my parents, but learned that the hidden spare key no longer worked on the door, so I had to wait out on the back porch for a couple more hours until they returned from Charlottesville. For dinner, we ate lamb and rice which, according to my journal, "tasted mildly okay".