It's been raining incessantly here which has kept me indoors for the most part. I'm slowly settling into an apartment routine and I've even been doing some real cooking for dinner a few nights a week -- everything from chicken and mushrooms to bacon & cheese meatloaf.

Ten years ago, I had just cut the cord to perpetual adolescence through graduate degrees and moved back to Virginia to work full-time. Having spent the previous two summers getting up progressively earlier to avoid traffic, such that my core hours were 5 AM to 1 PM, I finally resolved to live closer to the office (which was in Dulles at the time). 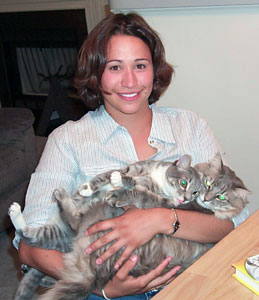 After visiting three separate apartment complexes in Centreville, I ended up at The Elms, $1135 per month for two bedrooms. The Elms had the deciding features of being across the street from a Glory Days, (which I ended up visiting once if at all), and having a "park anywhere" lot without reserved spots and towing and all of that nonsense. Runner-up #1 was a gated community, and those are annoying to invite people over to, while Runner-up #2 required a lightless left turn across two lanes of busy traffic to exit.

I also ended up renting one of the bedrooms to my college roommate, Anna, and the ninety-pound kitty, Kitty, who was consigned to an 8x8 room in Anna's parents house as punishment for peeing on everything. Since Booty had peed on everything in Tallahassee, we hoped that they would channel their pee at each other from here on out.

The Elms was the complex that solidified my need for a single-family home. While nice enough as apartments go, we had neighbours who held parties where they only listened to the bass notes of songs. When they moved out, they were replaced by a couple that was ghostly silent, except for the occasions where they were fighting, or humping, or both simultaneously. Ultimately, I only lived there for nine months before moving up to Sterling.

I also started refining my real world persona by doing things like cooking and learning to play the guitar. The latter lasted maybe three weeks total. The former continues to this day, although those seminal meals that I was so proud of weren't so great: chicken and mushrooms was chicken breasts submerged in cream of mushroom soup and baked, while bacon and cheese meatloaf was essentially a cheeseburger that had had an unfortunate accident with some Ritz crackers.