The first half of the weekend was quiet and nondescript. We sat on the back porch with a pinot grigot on Friday night, diligently waiting for the cicadas to arrive, but all we saw was a fearless skunk boldly rooting around in the backyard like a truffle pig.

On Saturday, I went to Costco for the essentials, such as five pounds of steak and a new badminton net (after nine years, the original net looks like public school gym equipment). I then worked on Bugler in the afternoon while Rebecca did female stuff like yoga and haircuts. We had a late dinner at Taste of Burma and then watched 30 Rock until we fell asleep. 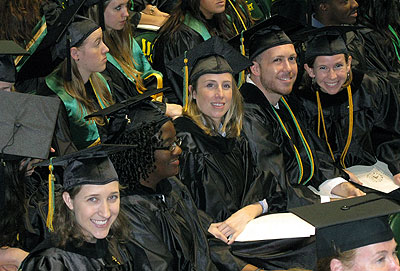 Sunday afternoon was the huge NOVA graduation, for which we spent a half hour sitting on Braddock Road waiting to turn left into the Patriot Center with PTSD flashbacks to the Nissan Pavilion. We were also in front of an old white guy in an Audi who became cartoonishly upset when it took five cycles to get through an intersection and smashed down on his car horn when I refused to "block the box". I gave him a Miss America hand wave out the window, and his Vesuvian blood pressure probably formed several more arteries in his chest cavity by the time we had gone through.

There were roughly 1200 students graduating on Sunday, which is apparently the largest community college graduating class in the country. I think we cheated a little though, since they bind all of the neighbouring college campuses into a loosely allied cluster of feudal city states under the Northern Virginia banner. I had a $6 box of nachos and a $4 coke to go with my $0 seat close to the action, and listened as the two of the four chosen name-callers horribly mangled any names that weren't in English or Spanish.

Getting out of the Patriot Center was much easier than getting in, and we closed out the evening with an early diner dinner at Denny's around the corner in Fairfax.